Many thanks to Mudflats for this wonderful post. Please visit http://mudflats.wordpress.com/2008/10/02/palin-v-supreme-court/ for the original:

Sigh… Palin can’t name a single Supreme Court case other than Roe v. Wade. Not one. Now, there might be some reasonably intelligent people out there who can’t rattle off a long list of Supreme court decisions. And, picking one you don’t agree with while you’re on the spot might not be easy for most Americans either. Granted most Americans are not running to be a heartbeat away from the Presidency, but even if we cut Palin a little slack here, I’ll tell you why we shouldn’t. And I’ll tell you why this particular gaffe makes the blood of many Alaskans run cold.

The first time I watched this clip, I chuckled. Then it hit me. It hit me like a smack in the face with a dead fish.

Below is part of a piece I wrote back in June, when a Supreme Court ruling came down in a case known as Baker v. Exxon. Most of you will recall the devastating oil spill that occurred in Alaska in 1989 when the supertanker Exxon Valdez slammed into Bligh Reef, pouring 11 million gallons (some say over 30 million gallons) of crude oil into the pristine waters of Alaska’s Prince William Sound. Many of those in Alaska at the time probably either know someone affected, or were themselves affected personally by the spill. Many of you who were out of state, cut up your Exxon credit cards, watched footage of oil-soaked otters and sea birds, and deeply mourned the loss of a place you’d never even seen.

The Alaska Natives in the area, and those who fished the Sound lost their livelihoods, and their ‘holy place’. The loss on many levels cannot be overestimated. Today, in 2008, if you dig down about 8 inches into the sandy beaches of many islands in the Sound you will find thick black crude oil. 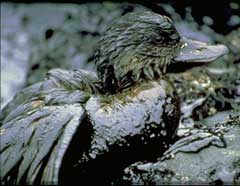 Well, the extremely predictable ruling came down from the U.S. Supreme Court today. In a 5-3 vote the court decided to hack and slash the original $5 billion settlement, which had already been hacked and slashed to $2.5 billion in punitive damages. Now the Supreme Court says the amount owed to Prince William Sound fishermen and Alaska Natives affected by the 1989 Exxon Valdez oil spill is $507.5 million.

First, condolences to the 32,677 plaintiffs, their families, and all those affected by the spill who have been waiting and watching for almost 20 years, while lawyers get fat sucking on the marrow of the oil soaked bones littering the beaches of Prince William Sound. This was hard to take for ALL Alaskans, but for the plaintiffs, and all those who love the Sound, it was twisting the knife.

Second, to all those people who have bought into the idea that the oil companies have been good to Alaska by donating to charities, sponsoring sporting events, and plastering their logos on anything that doesn’t move (and some things that do), listen closely. They. Don’t. Care. Exxon has been fighting this since the moment the $5 billion was awarded to plaintiffs in 1994. Think that’s a lot of money? It’s not. Exxon’s recorded profits last year were $40.6 Billion. That’s PROFIT. Doesn’t make $507.5 million sound particularly punitive, does it? If the health, well-being and welfare of the Alaska people mattered to Exxon Mobil, these people would have been paid 13 years ago. So when you see the oil companies doing something that looks ‘nice’, remember it’s the cost of doing business to shut us up.

Third, any Alaskans who are outraged by this announcement today, and are still planning to vote Republican in the upcoming presidential race – wake up. Who were the only supreme court justices voting with the Alaska people and against the interest of corporations? The progressives. Who were the ones that voted against the interest of Alaska? Roberts, Scalia, Thomas, & crew – those conservative judges that John McCain wants more of when he appoints the next 2 or 3 members of the court. Presidents are gone in four to eight years; Supreme Court Justices last a lifetime. A court like this is what we get when so many of us swallow the red Kool-Aid, and don’t think about the political ramifications of our votes to our own interest when the chips are down. So, in November, think. Please.

By the time all is said and done a huge portion of the $507.5 million has evaporated with the shrinking value of the dollar since 1989, another huge portion went to the lawyers, 8000 of the plaintiffs are dead, and the Sound has still not recovered, and won’t in our lifetime. They got about 10% of the oil, they think. Sometimes in life, you get a cheap lesson…this wasn’t one of those times.

Since that post, Exxon has reminded us that this $507.5 million figure is actually the upper limit of what they owe. And they are also balking at paying interest on that money. They are stalling, because they are literally waiting for plaintiffs to die.

So, I ask you, Sarah Palin, as the Governor of Alaska, a state whose land, water, wildlife and people have been ground under the wheels by corporate oil interests, backed up by a conservative Supreme Court put there by your party, is THIS one of those Supreme Court cases that you also disagree with? Or did you just forget about it?