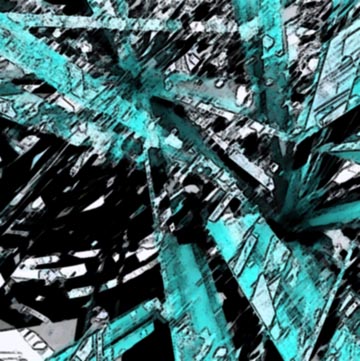 The Other Side of the Looking Glass

When last we left our heroine, she had been disarmed of her sword and was strapped to a gurney being transported to the emergency room for her own good . . .

The Mexicans in the Walls

So we arrive at the emergency room, where I am parked on a gurney in the hall to wait, for what or whom, I have no idea. I have already assured anyone who will listen that I don’t really need to be there, which is probably not the best thing to say in an emergency room full of people who need to be there. I am going to be taken to x-ray to make sure I didn’t hurt my back when I tried to rearrange the furniture. In the meantime, I am right outside the door of a man who is apparently—and I really am not making this up—dying. This is the only part of the story that is not the least bit humorous, and I don’t think that this was part of my hallucination. He is moaning and crying and no one is doing anything about it. It’s tearing me to pieces to hear this, and I just want to go home. I promise my husband that if I can just go home, I’ll be fine, but I don’t want to hear this man any more.

In the meantime, someone decides that I need an IV. The crew from the ambulance that brought me in assert comically that they need some practice in this area, so one of them volunteers. It’s the female. She gives me the smile given to crazy people to assure them that everything is going to be all right when it’s obvious that it won’t be; then she jabs me with the needle: again and again and again. She looks over at the person who I assume is her supervisor and says, “I can’t do it,” to which I ache to reply, “No shit.” He ambles over, picks up my arm, and declares: “She has really tiny veins.” I reply to his assertion, “no one’s has ever had problems with my veins,” but they aren’t listening because they think that I’m crazy. Well I may be crazy, but I know my veins. This guy tries twice and misses. I give him a look like I’m going to pull a sword out of my butt, and he backs off.

Finally, a technician comes by, (I deduce what she is because she is carrying one of those carts with all of the tubes and needles and stuff), and I tell her what they’ve been doing to me, and she says, “Oh my. Here.” And in goes the needle, and I have an IV. I’m glaring at the EMT’s who are hanging around the vending machines. This is why I didn’t want to come to the emergency room.

Did I mention the medications? Probably not. When the EMT’s were in my bedroom checking my vitals and getting ready to take me out,

they noticed my little castle of drug bottles by the bed, the veritable cornucopia of pharmacopoeias. They looked at each other, and I’ve seen that look: “She’s a druggie.” Please let me pause here. I had just been released from the hospital for back surgery. I had a few meds on my nightstand, along with my medicine for heartburn and other ailments. But they are jumping to the White Rabbit conclusions (you know, “Go Ask Alice,” Jefferson Airplane), and frankly, at the time, all I could think of was Desi Arnaz saying to Lucy, “Lucy, you got some ‘splainin to do,” which would have made me giggle, so I shut up.

I wanted to giggle a lot during this whole episode, but I think that (other than the two cops at my bedroom door), I’m the only one who was finding any humor in the situation.

So now that I have an official IV and an ID bracelet, we sit. And sit and sit and sit. The man in the room is moaning horribly, and I’m getting hungry. I also need to pee. I ask my husband what we are waiting for. He replies that he’s not sure. We’ve already been there for two hours going on three. I get off the cart, and my husband immediately panics and asks where I’m going. I tell him to calm down. I’m not running away from the ER, I just need to pee. But that’s harder than you would think when you have an IV, and people are in rooms, and there is no bathroom close by. I find a bathroom but am not particularly happy about its cleanliness—it is, afterall, a hospital, and they are teeming with germs, and by now, I am very ill-tempered, and I just want to go home.

My beleaguered spouse goes to see if anyone will see us, and comes back without anyone. So I pull out my cell phone and call the ER main desk. I distinctly remember doing this as this is something that I would do under normal circumstances. I call the main desk and ask if anyone is ever going to see me. The person who answers the phone is very confused. She asks who she is talking to. I tell her that I’m the woman on the gurney in the hallway outside of the door of the man who is dying, and no one has even checked me in yet.

A doctor shows up in two minutes. We give him a rundown of what’s going on. He totally ignores me (which proves my whole conspiracy theory), and only talks to my husband. I realize that he’s a resident. I hear him go off and consult with the attending, a female physician who comes back and asks my husband if I want a psych consult. I say, “No. I don’t need a psych consult. I just want you to tell me why I’ve started to have post-op hallucinations.” They order a psych consult.

After four hours, I tell my husband that we’re going. He looks at me, and I say, “Look, obviously, it’s something to do with my medicine. You can call the surgeon’s office when we get home. I want to go home and get back in bed. I’m not hearing or seeing anything any more since I haven’t had any medicine in almost six hours. Just take me home, and put me to bed.” He reluctantly admits that I have a point. Truthfully, at this point, he himself is so exhausted that he would probably agree to me performing surgery in the hallway if it would get a response out of someone.

I wait for the next physician type to walk by and then loudly announce that I’m leaving. It’s the resident again, and I think that I’m scaring him. The female attending comes back, says that I have to sign papers saying that I am refusing treatment. When she thinks she’s out of earshot, she starts talking about me. This time, I’m not hallucinating.

On a better day, I would have taken her to task, but today I have to admit defeat. I’m tired, and I just want to be gone from this hell-hole.

We go home, and my husband finally speaks to someone knowledgeable at the doctor’s office. Turns out that the whole thing was a result of my having stayed in the hospital on the extra strength kaboom medicine for five days instead of three and then going home and taking extra strength pills that the doctor had prescribed for me without taking into account that I still had all of the other stuff in my bloodstream. In other words, the surgeon didn’t bother to do some measured calculations on how much frigging stuff they were pumping into me those two extra days that I was hospitalized and then sent me out into the world, an hallucinatory event in waiting.

What a pedestrian explanation for a calamitous event. After we got home I heard the music a little bit more, but didn’t say anything. My husband got some sleep. My kids approached me tentatively, and I tried to explain that I wasn’t psycho any more. But as far as the whole family of Mexicans and their card table and coffee behind the walls? I think that they left when the ambulance pulled out of my driveway.

It was one hell of a ride, I’ll give you that. The person who had the worst end of it was my poor spouse, who was just trying to keep me from hurting myself. The cops who turned out in full armor probably laughed themselves silly at the stupid woman who was waving around a sword with a blade so dull that it wouldn’t even cut an apple. And I had to have an MRI to make sure that I hadn’t undone the surgeon’s work when I tried to move a 200-pound dresser to bar the non-existent intruders.

It never occurred to me to ask the Mexicans in the walls for help.  But that’s just as well. Now that there is a lot of time and distance from this event, I find it highly amusing,

but my husband? He still is not amused. I cannot imagine why.

So this is the moral of the story: If you have a lot of pain medication when you are in the hospital, and they give you more pain medicine to take at home, don’t be surprised if you start to hallucinate. I’m not sure if you’ll have a Mariachi band as I did. But whatever your hallucinations may be, just know that it’s the medication, and don’t allow yourself to be used for recertification training for EMT’s who need to practice sticking people who are conscious.

And that dear friends, is all for now. Peace.