Cover from The Furies by John Bolton (This is how I felt after my confrontation with Eamonn: vicious)

“The years teach much which the days never knew.” ~ Ralph Waldo Emerson 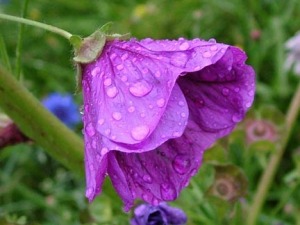 Rain today, lots and lots of rain, and tornado warnings. And guess what’s on the forecast for the rest of the week? Rain. Every day this week through Friday. The temperature is supposed to be in the 60’s then warmer then cooler.

I’ve stopped wondering why I wake up with clogged sinuses every morning.

The other night we had a major scare that I didn’t really want to write about at the time: Tillie had a seizure. Corey came running into the house carrying her, and I could tell right away that he was scared beyond anything I have ever seen in his face. Tillie’s legs were drawn up to her body; she was frothing at the mouth, and her eyes looked wild.

We called the emergency vet who told us that when these things happen to dogs, they usually pass within 30 minutes or so. The woman on the phone also told Corey that we didn’t need to bring Tillie in if it passed, but that we should watch her.

Within an hour, she was completely back to normal. The rest of the family was on edge for the entire night. The next morning, Corey took Tillie to our regular vet, where they promptly did blood work and a few other things, only to tell us that they couldn’t really say what caused the seizure, but to be on the lookout in case she starts to have them on a regular basis.

I won’t even talk about the bill because it was obviously more than we could afford, and the vet’s office does not let you make payments (we asked).

So much for getting caught up on the water bill.

Anyway, I’m not really sure what our dog’s seizure has to do with rain aside from the fact that Tillie just ran into the bedroom and put muddy paw prints on the clean sheets. Four more days of this. Hooray for the water supply. Boo for the wet dog syndrome, that is, getting muddy prints on things if you don’t catch them at the door and wipe them off.

It’s been a very long day: I spent the greater part of the early afternoon in a to-do with the older son, which left me feeling old, irrelevant, and frankly, bitchy.  He knows exactly how to push my buttons just as his father did, and never hesitates to push every one of them when we get into these arguments. After I cooled down and came into the bedroom, Corey quoted me this passage from the book of Timothy: “Let no man despise thy youth” (4:12), which gets me started in interpretations, obviously not what he had in mind.

He hates it when I begin to parse. Anyway, the whole point (which I knew from the very beginning, but I wasn’t in the mood to play nicely) was that a person should act in a way that he or she never gives other people cause to despise them (which Eamonn was not realizing by comparing me to high school girls and saying that all females are alike.

I know. Don’t even get me started again.

Needless to say, I left Eamonn’s room with a less than stellar attitude, which was soothed somewhat by watching part 2 of The Two Towers with Brett this afternoon. But I really don’t feel inspired to delve into too much, having already delved into too much of life’s basic lessons with my eldest who will someday rue the day that he was stupid enough to say to his very feminist mother that all females are alike.

All of that being said, I’m really far too tired tonight to do a regular post (my kind of regular post with witty quotes, graphics, etc.), but I wanted to put something up here for now. Just a note, the graphic above is a repeat for those of you who have been following my blog for awhile, but it just felt so appropriate for today.

Time for a cup of tea and some bedrest. More later. Peace.