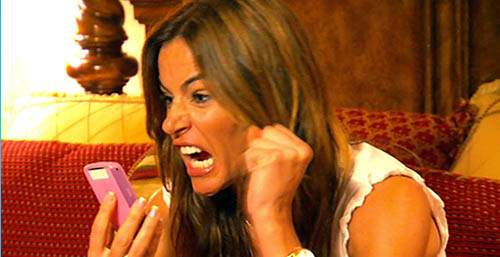 Kelly Bensimon: “Bethenny has knives on her tongue. She’s trying to kill me . . .”

“How many legs does a dog have if you call the tail a leg?  Four.  Calling a tail a leg doesn’t make it a leg.” ~ Abraham Lincoln

Over at gawker.com, Richard Lawson did his final recap of the “Real Housewives of New York”: the lost footage. Yes, RHNY even milked a lost footage show out of the ashes of nothingness.

It was classic Lawson: witty, sardonic, and chock full of spot-on visual imagery. And the comments in response to Lawson’s recaps are almost as much fun to read as the post itself. Here are the last two paragraphs:

Finally, finally, finally . . . we are done. There are no more reunion specials to look at, no more lost footage, nothing. Andy is silent for now. Everyone has been loaded into the freezers and left for later. Someday not terribly far off, Andy will look out at the sky, feel the winds changing direction, see the birds flying in telltale patterns, and he will know that it’s time again. To shuffle down to the basement with his big ring of keys and unlock them. Lay them out on the chamber tables to defrost. Well, some he will leave in the freezer forever, their hearts slow and cold. But others he will thaw out, breathe life back into again, stroke their hair, whisper “Welcome back. Welcome home. Did you have any dreams?” Someday that will happen again, and we too will notice the signs. Notice eddies swirling in new ways, see the plants bending toward a different light. And we will know.

But for now there is just silence. The gauzy hush of a summer in New York City. All the green disappearing into yellow, into brown. Bethenny is, yes, getting married. There is no question. There is no mystery. All our questions have been answered, we are satisfied, closed, already moving on. Moving like sharks, still alive. That old dog watching us, knowing something eternal that we don’t. Well, not just yet, at least.

Oh that I could write like Lawson, have Lawson’s job . . .

The Jelly Bean Song is Lawson’s homage to Kelly I’m-crazier-than-a-loon Bensimon, who subsists on jelly beans and beer and/or wine, even though she doesn’t drink or eat processed foods (in her words). For Kelly, saying it makes it so even if it’s all in her head.

Until next season. Peace.