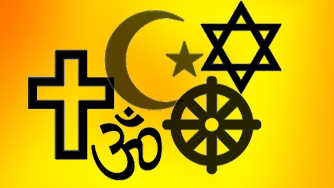 “If the freedom of religion, guaranteed to us by law in theory, can ever rise in practice under the overbearing inquisition of public opinion, then and only then will truth, prevail over fanaticism” ~ Thomas Jefferson

I have been avoiding posting anything about the proposed mosque in NYC, not because I don’t want confrontation, but because I think that Gingrich, Palin, et al, especially in this instance, are the apotheosis of everything that is going wrong with this country, most especially in the right’s overwhelming short-term memory lapse regarding one of our most basic creeds: the First Amendment:

“Congress shall make no law respecting an establishment of religion, or prohibiting the free exercise thereof;” (emphasis mine)

And like the second part of the First Amendment—”or abridging the freedom of speech, or of the press; or the right of the people peaceably to assemble, and to petition the Government for a redress of grievances—I reserve my right to disagree with you, but I will support you in your right to say what you will, even though a whole lot of what you say is jabberwocky.

Keith Olbermann: There is no Ground Zero Mosque