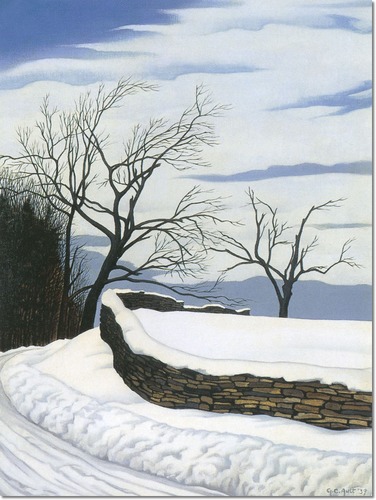 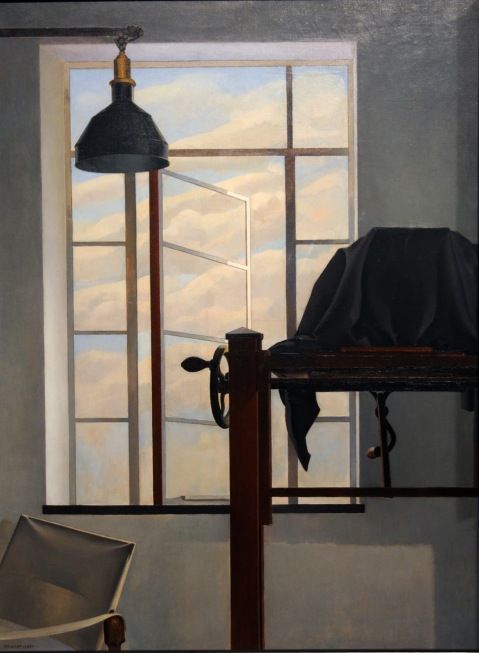 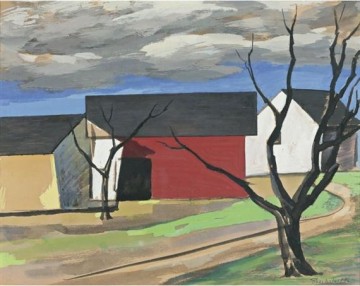 “Red Barn and Trees” (1946, gouache on paper)
by Charles Sheeler 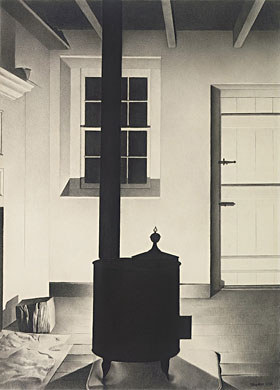 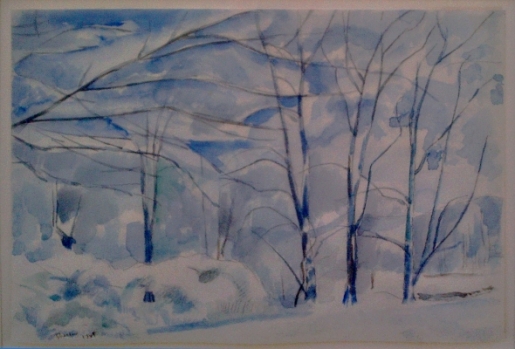 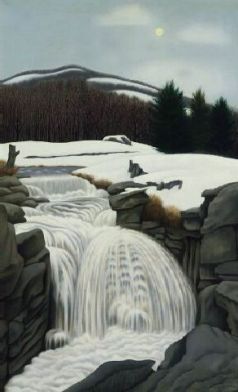 “Perhaps our deepest love is already inscribed within us, so its object doesn’t create a new word but instead allows us to read the one written.” ~ Anthony Marra, from A Constellation of Vital Phenomena

I have to admit that this latest round of bronchitis left me quite pitiful for much longer than I would have anticipated. In between, I’d have a good day or two, and then the coughing would come back stronger than ever, and I would spend most of the night alternating between hacking up my lungs and giving myself nebulizer treatments.

It seems that the worst has finally passed, and last night was probably the first night during which I did not awaken with a coughing fit. Needless to say, I didn’t much feel like sitting here at the keyboard and trying to come up with something witty to say, especially since my wit seemed to vanish sometime around Christmas day. Let’s just say that it’s been a strange holiday season, for a myriad of reasons.

Anyway, I thought I’d make the time today to try to get something down here, even if it’s not much of anything. I just hate that I’m five days into 2015, and I haven’t written or posted anything, not even pictures of the New Year’s Eve fireworks.

“But no life is a line, and hers was an uneven orbit around a dark star, a moth circling a dead bulb, searching for the light it once held.” ~ Anthony Marra, from A Constellation of Vital Phenomena

I did manage to read a few books since my last missive: Help for the Haunted, by John Searles; Never Let Me Go, by Kazuo Ishiguro, and Deep Water, by Patricia Highsmith, all Christmas presents from Corey. I had added all three to my Amazon wishlist at some point.

I liked all three, the Ishiguro the most, and the Highsmith the least. I’m not sure if it’s just me, or a phase I’m in, but I’ve been disappointed in the endings of several of the last few books I’ve read. For example, in a book that I read a couple of weeks ago, The Tenderness of Wolves, by Stef Penney, the ending was too abrupt. James Joyce was famous for his open-ended stories, especially in Dubliners. The stories were meant to be a slice of life, and after the ending, it was implied that life continued, and I suppose, since that’s what I expected of Joyce, the open-ended nature didn’t bother me so much. But in Penney’s book, I still had questions.

It’s hard to explain, really, only that I didn’t feel satisfied after turning the last page, and this feeling of dissatisfaction has happened more this past year. Perhaps I am reading with a more critical eye? Who knows. Anyway, reading is pretty much the only thing I’ve accomplished while I’ve been sick, that and binge-watching movies and “Downton Abbey.”

“We twist our souls around each other’s miseries.” ~ Anthony Marra, from A Constellation of Vital Phenomena

Alexis, Mike, and Olivia got back from Mississippi last week, so this weekend we had our family Christmas dinner with all Filipino food, and then after, they opened their presents. Olivia really liked her drawing easel, so that was a good pick. I know that it will just seem like bragging, but she is scary smart. I mean, she’s two and a half, barely, and she knows her ABCs, numbers to 20, and shapes. She speaks in polysyllabic words, and she’s starting to recognize words when we read.

She’s also very intuitive, and can sense when something is wrong, which is why I’m so worried about her at the moment. Things at her house are quite tense because my daughter is acting up again, and it just slays me that I cannot protect Olivia from this. It’s the elephant in the room that we have all been creeping around so carefully, but things are going to have to be confronted eventually.

I cannot be too detailed because I must respect their privacy. I can only say that far too often, people assume that young children do not pick up on things when it is quite obvious that they do.

“As someone whose days were defined by the ten thousand ways a human can hurt, she needed, now and then, to remember that the nervous system didn’t exist exclusively to feel pain.” ~ Anthony Marra, from A Constellation of Vital Phenomena

Because I was so sick, I never made it to the cemeteries before Christmas to take the poinsettias I had bought for all three graves. The guilt over this is weighing heavily on me, so much so that one time when I opened the sliding door to let the dogs out, and I saw the box of flowers on the steps, I yelled, “I am not a bad daughter, mom.”

I’m not sure how much not having my mom around for the holidays has affected my kids, but it has really taken its toll on me. There is just so much guilt—guilt over being relieved that she wasn’t sitting at the table criticizing me throughout Thanksgiving dinner, guilt over not having to fret over my Christmas presents not being right. And then there is the immense sadness for which I was unprepared—sadness that she wasn’t sitting there at Thanksgiving and Christmas dinner complaining, sadness over her not being around to see Olivia at Christmas.

Let’s face it: my feelings about my mother remain highly conflicted, and I doubt that that will ever change. But I could just hear her voice bitching at me because I hadn’t taken the time to put flowers on their graves, because I don’t visit the cemetery enough. And truthfully, I don’t visit enough, but how much is enough?

I know that all of this is self-imposed; still, it does not lessen it in any way.

“How often is immense sadness mistaken for courage?” ~ Anthony Marra, from A Constellation of Vital Phenomena

You see, that same day that I yelled at my mother’s ghost, I had picked up David Eggers’ A Heartbreaking Work of Staggering Genius, which is a pseudo-memoir dealing with the loss of both of his parents within a year. It’s a hard book, mostly because Eggers has continual asides in the form of long notes and explanations, and I can relate to it because it is very similar to my own writing style. I had only made it through the introduction when I decided that I still wasn’t ready to go further, mostly because I knew that delving any further into it would only provoke more strong feelings about my mother.

Did that make any sense?

So I found myself yelling at my mother that I wasn’t a bad daughter, and then I immediately retreated to my bed, in much the same way I did as a teenager when I felt overwhelmed. And all of this is probably boring you to tears if you’ve managed to stay with me thus far, but I can only say that I had a feeling that I didn’t have much of any import to say when I began this post, and only guilt over not posting forced me to carry on because guilt is once and forever my driving emotion.

Enough. Perhaps I’ll be able to come up with a new direction soon. With any luck, that is.

All quotes are from the Anthony Marra work, A Constellation of Vital Phenomena, which is on my to-read list.

Images are by Precisionist painters Charles Sheeler, Charles Demuth, and George Ault. I love all of the barn variations. For more on these artists, click here.

Music by Lord Huron, “Ghost on the Shore”

I am the one standing in the rain,
invisible beside you. I am the one in the dirt
which is now turning to mud around my feet.
I am the one weighed down by each of our partings
and the one lifted up by each meeting,
reachings that could not be completed, that
nevertheless held up the force of their hunger.

And, yes, you were always a seeking, an unknown,
a mystery to me. And not less that I to myself—
beginner that I have become all over again
on the paths and mountain slopes of this journey.
I watch my mind watch each moment in its passage,
it fades into, blends, with what came before.

Nothing remains as it was in the mind
after the path has been seen and walked upon,
there is always the next thing arriving
as if from behind, catching up with one’s sight,
surrounding. And all the while the snows of memory
are falling, covering the roads of the present.

The past overflows this moment without meaning to,
just as your face is more real in my remembering
than this present one sitting next to me,
just as each of us hurt the other without
intending it. And after a time we thought
experience might bring us to calm, and we see

we are standing in the river of passing,
each waiting for the warmth of the other’s face,
unable to understand why they are not with us,
startled by their absence, traveler and traveler
distant as two dots unconnected in a yellow field.

One thought on ““But inside us there is a word we cannot pronounce and that is who we are.” ~ Anthony Marra, from A Constellation of Vital Phenomena”