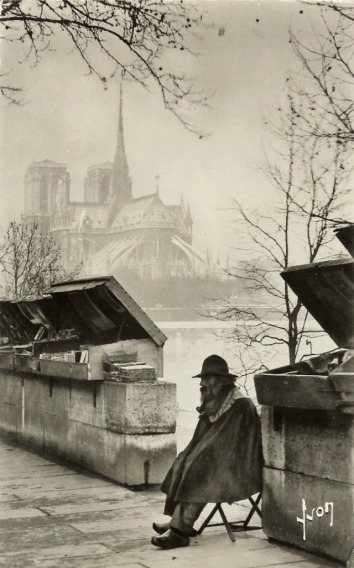 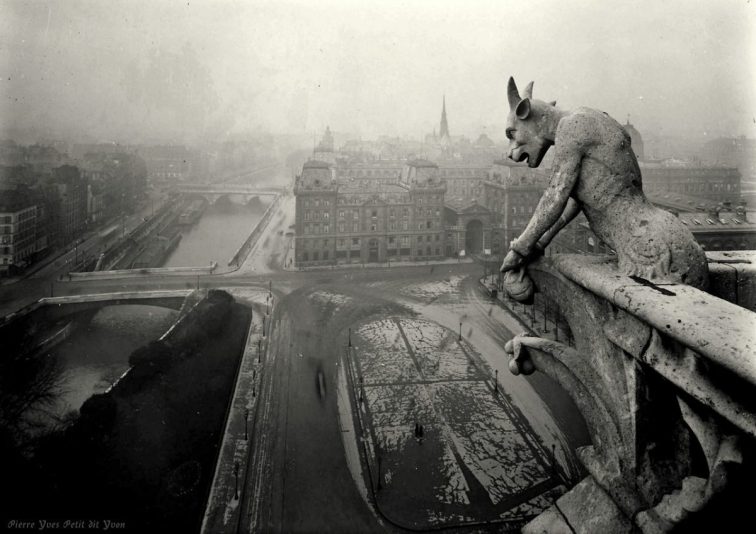 With angel’s wings and brutish-human form,
Weathered with centuries of sun and storm,
He crouches yonder on the gallery wall,
Monstrous, superb, indifferent, cynical:
And all the pulse of Paris cannot stir
Her one immutable philosopher.
………………..~ Edmund Kemper Broadus, “A Gargoyle on Notre Dame”

Did I tell you that it snowed for a few minutes yesterday? Snowflakes in April on tax day. How fitting. It was cold yesterday.

I still have Notre-Dame on the brain, so I thought that I’d share some historic images of the cathedral from the 1800s. Thinking of Notre-Dame reminds me of Raymond Carver’s short story “Cathedral,” a favorite of mine that I used to teach in American Literature classes. If you haven’t read it, you can find it here.

Today is a Two for Tuesday, but the theme is kind of murkier: the mind as a personal cathedral.

The man in the yellow hard hat,
the one with the mask
across his nose and mouth,

toward the earth;
then the wrecking ball
dangles crazily,

so delicately, like a silver fob
loosened from a waistcoat pocket:
shocking to see

the dust fly up and the timber
sail up, then so slowly
down, how the summer air

bristles with a hundred splinters
and the smallest is a splintered flame,
for it takes so many lengthening

erratic movements to tear away
what stands between the sidewalk
and the bell tower,

where the pigeons now rise
in grand indignant waves
at such poor timing, such

a deaf ear toward the music;
in this way the silence

between hand and lever is turned
into a ragged and sorely lifted
wing: the wrecking ball lurches
in a narrowing arc until only

the dust resists—the rest
comes down, story by story,
and is hauled off in flatbed trucks.

Meanwhile the pedestrians come
and go, now and then glancing
at their accurate watches.

Gradually, the dust
becomes the rose light
of autumn.

of commuters and she
looks up toward the perfectly
empty rectangle

now hanging between
the rutted mud and the sky.
There along the sides

of the adjacent building,
like a set for a simple
elementary school play,

like the gestures of the dead
in her children’s faces,
she sees the flowered paper

of her parents’ bedroom,
the pink stripes leading
up the stairs to the attic,

and the outline of the claw-
footed bathtub, font
of the lost cathedral of childhood.

Explication of an Imaginary Text

Salt is pity, brooms are fury,
The waterclock stands for primordial harmony.

The spruce forest, which is said to be
Like a cathedral
Indicates proliferation of desire.

The real meaning of the beginning
Will not become clear until later, if ever.

Things no longer being what they were,
Artifice poses as process,
The voice is tinged with melancholy.

The teacup, the brass knuckles, and the pearl-handled razor
Resist interpretation

Speaking through the character
Who comes to faith on his deathbed,

The author makes apology
For saying things he didn’t mean.
Little girl-cousins with ribbons in their hair

Confuse him with their names and are carried away
By laughter. Thus,

The force of love comes from belief,
Hate is from lack of doubt.
Paradox by paradox the narrative proceeds

Until half the stars are absolute tears.
The other half are mirrors.

Continue to be in a blues mood. Music by Gary B.B. Coleman, “The Sky is Crying”