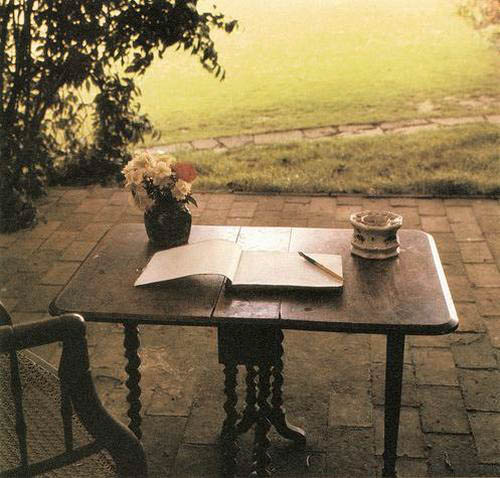 “There is something infinitely healing in the repeated refrains of nature—the assurance that dawn comes after night, and spring after winter.” ~ Rachel Carson

I woke up speaking French again. Very disconcerting. However, as Corey pointed out, what would be more disconcerting is if I did not actually know French, but I was speaking it in my dreams. Granted, my conversational abilities are very limited, but for some reason, I dream in French occasionally.

It’s absolutely beautiful here today, a perfect spring day. That is, everything would be perfect if not for one thing: yesterday was opening day at the park that our house abuts. Opening day is exactly what it sounds like: the baseball season opening, which means lots of cars beeping their horns, the loudspeaker blaring at 9 in the morning, car alarms, and litter.  Every year, people park illegally in front of our house. I say illegally because of the no-parking signs and the fire hydrant, not because I don’t want them to park there. I try to warn people if I see them parking that they will get a ticket if the police happen by, but they usually just look at me as if I am being the neighborhood bitch.

I’m very excited because season 4 of The Tudors premieres tonight. This will be the last season for the Showtime series, starring Jonathan Rhys-Meyers as Henry VIII. In this season, Henry will marry his last two wives (Katherine Howard and Catherine), get old and fat, and go to war. So far, season 2 has been my favorite.

The news is full of sad things: the death of the Polish president and his contingent while en route to Smolensk, Russia for a memorial. According to news reports, the visit to the Katyn forest was to mark the 70th anniversary of the killing of thousands of Polish officers and intellectuals by the Soviet secret security during World War II, an action that led to a huge rift between Poles and Russians.

In Comfort, West Virginia, the bodies of the four missing miners were found, bringing the total number of those killed to 29. The Upper Big Branch mine disaster is the worst in U.S. history since the 1970 disaster in Kentucky. Apparently, the rescue crews walked past the four bodies that first day, but could not see them because the air was so smoky and dusty.

A Tennessee woman put her seven-year-old adopted Russian son on a plane by himself. The plane was going to Russia, and the ticket was one-way. The mother claims that the boy, renamed Justin, terrified her family by threatening to burn down the house with everyone inside. Now the woman’s family is claiming that the Russian orphanage lied to her about the boy’s behavior problems. So many things wrong with this story, not the least of which is the fact that the woman wasn’t returning a broken vacuum to Wal Mart. The adoptive grandmother bought the ticket, and the family arranged to pay a man in Russia $200 to take Justin from the airport and leave him at the Russian education ministry. A note was sent with the boy that read in part, “After giving my best to this child, I am sorry to say that for the safety of my family, friends, and myself, I no longer wish to parent this child.”

And on another sad note, Dixie Carter, star of television series “Designing Women” has died at the age of 70. I loved wise-cracking Julia Sugerbaker. Like the woman who portrayed her, she was smart, attractive, and took no guff from anyone. Funnily enough, some of my friends used to compare me to Julia Sugerbaker, can’t understand why. Carter was married to actor Hal Holbrook.

“your slightest look easily will unclose me
though i have closed myself as fingers,
you open always petal by petal myself as Spring opens
(touching skilfully, mysteriously) her first rose” ~ e. e. cummings, “somewhere i have never travelled”

One of my blog friends is packing some books to ship to me. I cannot wait. For me, nothing is better than a box of books, not even a squishy black leather Kenneth Cole purse, if that gives you any idea as to how much I love books. Of course, I wouldn’t turn down a Kenneth Cole purse, but since no one is offering . . . Anyway, Kelly is a bibliophile like myself, so she understands just how dispiriting it is not to have books to read, hence her very generous offer to send me some books. In the future, I hope to participate in the Goodreads Book Swap, which is a wonderful idea.

If you love books but have yet to visit the Goodreads site, I suggest you do so soon. Goodreads is a great resource for readers in so many ways. Go to http://www.goodreads.com/. You’ll be glad that you did.

My ex called me last night, just to talk. Wow. I don’t remember seeing the news that hell had frozen over. No really, it’s been a long time since we’ve had a conversation that did not quickly escalate into an argument. He even sounded relatively sober, another first. I did suggest, very gently, that he might want to try to spend a bit more time with his mother as there is no way of knowing how much longer she will be around. I am one of the few people who can get away with saying something like that to him. His sister has tried, but he sees that as her way of trying to tell him how to live his life. I had heard that his girlfriend is moving here from Chicago. He confirmed that she will be here in July. That should be interesting. His last two serious relationships went up in flames. I hope this one works for him.

Now don’t be that way. I’m being sincere. As much as we have our problems—and boy, do we have our problems—I do wish him well. If for no other reason than the fact that when he’s happy, we get along better and can actually have adult conversations that don’t devolve into name-calling. Anyway, it will be interesting to see how Eamonn gets along with a new stepmom.

On that note, I think that I’ll close for today with an appropriate quote from Barbara Kingsolver:

“April is the cruelest month, T.S. Eliot wrote, by which I think he meant (among other things) that springtime makes people crazy. We expect too much, the world burgeons with promises it can’t keep, all passion is really a setup, and we’re doomed to get our hearts broken yet again. I agree, and would further add: Who cares? Every spring I go out there anyway, around the bend, unconditionally . . . Come the end of the dark days, I am more than joyful. I’m nuts. “

The one and only Ray Charles singing “Georgia on My Mind.” Classic.

And for those of you who loved “Designing Women,” here is a classic Julia Sugerbaker moment: