Elizabeth: The Golden Age (with Cate Blanchett and Clive Owen)

I just can’t put it together today cogently, so I’m doing something I’ve been thinking about doing: a Bests List. Feel free to tag me back with your bests if you want to play along.

The English Patient by Michael Ondaatje. The prose is beyond eloquent. Reading this book is akin to bathing in finely-scented oils: each time you read a beautiful passage, you think that nothing can possibly be any better than this, and then a few pages later, Ondaatje takes his words and lavishes them upon you until you feel utterly immersed in the exquisite way in which he mates his words to create something incredibly beautiful:

“New lovers are nervous and tender, but smash everything. For the heart is an organ of fire.” (Almaszy), or

“We die. We die rich with lovers and tribes, tastes we have swallowed, bodies we’ve entered and swum up like rivers. Fears we’ve hidden in—like this wretched cave. I want all this marked on my body. Where the real countries are. Not boundaries drawn on maps with the names of powerful men. I know you’ll come carry me out to the Palace of Winds. That’s what I’ve wanted: to walk in such a place with you. With friends, on an earth without maps. The lamp has gone out and I’m writing in the darkness.” (Katharine Clifton)

Or this one: “He glares out, each eye a path, down the long bed at the end of which is Hana.  After she has bathed him she breaks the tip off an ampoule and turns to him with the morphine.  An effigy. A bed.  He rides the boat of morphine.  It races in him, imploding time and geography the way maps compress the world onto a two-dimensional sheet of paper.”

Best Character in a Movie:

This one was hard. I finally narrowed it to two characters: Henry the Fifth in Henry V,  starring Kenneth Branaugh. Henry V was one of England’s great king’s historically, and his depiction by William Shakespeare made him truly heroic and larger than life, a king men were willing to fight and die for. The St. Crispin’s Day speech delivered by King Henry before the battle is an incredible piece of oratory:

My other favorite movie character is William Wallace in Braveheart. Obviously, my choices have something in common. They are both men of valor, fighting for that in which they believe. Wallace is the less regal version of Henry.

Starbucks Sumatra venti with half and half and sugar. Sumatra is a dark, bold coffee, which is the kind I prefer. I don’t like wimpy coffees, but I do like my half and half in my coffee. I’m trying to cut down on the sugar, though, since I just got the lab results back on my triglycerides (yikes!).

Again, this is a category that is very hard for me to pick just one Best of, so I thought that I would make it easier on myself by creating categories.

Best Series No Longer on Television:

This one was easy: “Homicide: Life on the Street.” Set in Baltimore, this gritty cop show ran from 1993 to 1999 and featured one of the best ensemble casts ever. The only thing that I could never reconcile was the question posed in the first episode of the first season: Who killed Adena Watson?

“Countdown With Keith Olbermann” on MSNBC. I love this guy. He appeals to my sardonic side in a way in which no other pundit ever has. He can also show emotion, such as on the night that Barack Obama was elected or on the night of Obama’s speech to the DNC. I like a human pundit who has wit and brains and a segment called “Worst Persons in the World.”

“The Olive-Wood Fire” by Galway Kinnell. I could name at least fifty others, but this poem has stuck with me for a while: a man, rocking his son to sleep by the fire, dozes off, and sees images of war in the fire. Awakens to the placid picture before him: his son on his arms before the olive-wood fire.

When Fergus woke crying at night.
I would carry him from his crib
to the rocking chair and sit holding him
before the fire of thousand-year-old olive wood.
Sometimes, for reasons I never knew
and he has forgotten, even after his bottle the big tears
would keep on rolling down his big cheeks
—the left cheek always more brilliant than the right—
and we would sit, some nights for hours, rocking
in the light eking itself out of the ancient wood,
and hold each other against the darkness,
his close behind and far away in the future,
mine I imagined all around.
One such time, fallen half-asleep myself,
I thought I heard a scream
—a flier crying out in horror
as he dropped fire on he didn’t know what or whom,
or else a child thus set aflame—
and sat up alert. The olive wood fire
had burned low. In my arms lay Fergus,
fast asleep, left cheek glowing, God

Best Karaoke Song for Me:

“I Will Remember You,” by Sarah McLachlan. Perfect key for my voice, and I feel a connection to this song. 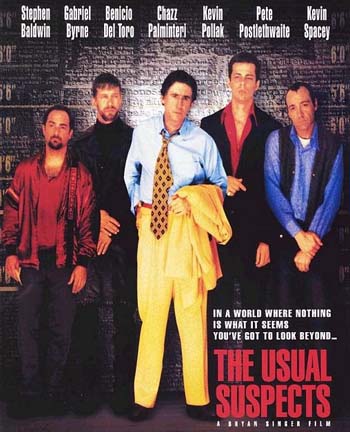 The Usual Suspects. The casting in this movie is pure perfection. The plot line is completely implausible, but it is a movie that I will come back to again and again. I have no idea how many times I have watched this movie.

Best line spoken by character Verbal Kint (played beautifully by Kevin Spacey): “Keaton always said, ‘I don’t believe in God, but I’m afraid of him.’ Well I believe in God, and the only thing that scares me is Keyser Soze.”

Runner up (and it was hard to choose) would have to be Lord of the Rings (I’m counting this as one long, nine-hour movie). I have read the trilogy once a year almost every year since I was an undergraduate. Peter Jackson managed to do what I thought no person would ever be able to do: He brought to life a set of books about which many people are fanatical, and in a way that is beyond description. I am still willing to relocate to New Zealand to be a gopher for Peter Jackson any time he calls.

Actually, now that I think of it, it has to be a tie.

This is close, but I think that I have to go with Cate Blanchett, simply because I have never seen her in anything in which her performance was not superb; the movie may have been mediocre, but Blanchett is never mediocre. She has that chameleon-like ability that Meryl Streep has, but I like Blanchett’s body of work better.

Okay, I am really not basing this on looks, but out of all of the actors working today, I particularly like Clive Owen for a lot of the same reasons that I like Kate Blanchett. Owen does not choose to do the same role over and over with just a different movie title. I loved him as Sir Walter Raleigh in Elizabeth: The Golden Age, but I also loved him as Theo in Children of Men, in which he is much more vulnerable and a victim of circumstances.

Seven-day cruise to Western Caribbean, 2006. Just Corey and me: cave-tubing, swimming with stingrays, sailing on a catamaran. Great meals. No work. Wonderful.

Black Calais. Loved that car. It had a great stereo; it was great on gas, drove smoothly, comfortable interior.  Killed it in an altercation at a stoplight when right front bumper turned into accordion after tapping metal bumper of full-sized Suburban. Damage to their car: dent in bumper. Damage to my car: totaled.

Best Day That Cannot Be Repeated:

The day that Corey and I went to Busch Gardens Williamsburg with my Mom and Dad. I hadn’t been to a theme park with both of my parents since I was a child. We had a wonderful time, and had our picture taken on the log flume. My Dad would die from pancreatic cancer less than half a year later.