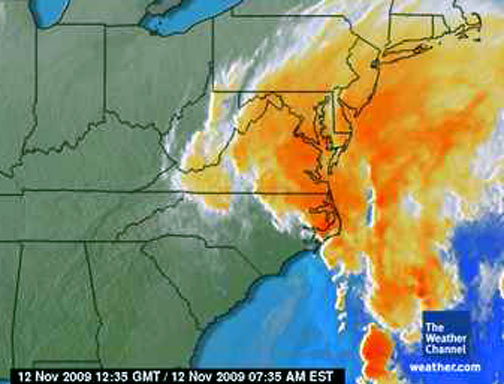 Just an update. The storm outside has not stopped. Wind gusts today are expected to get up to 60 mph. Rainfall by Friday could reach eight inches or more. Swells off beaches are anticipated to build between 12 and 19 feet. If this turns out to be as bad as they expect, water levels in the bay and ocean could damage fishing piers. The normal tide is about 2.5 feet, but officials are expecting that to go as much as 7 feet with high tide.

So far, 8400 residents are without power, which is pretty remarkable considering what the winds sound like. Local news reports that the Virginia Department of Transportation has closed one tunnel. In case you didn’t know it, we cannot evacuate this area without going over a bridge or through a tunnel. You think about things like this during hurricane season.

Hampton Boulevard, one of the main local roads on which Old Dominion University is located, is flooded, and Governor Tim Kaine declared a state of emergency last night, mostly because of flooding. The Virginian-Pilot reports that flooding along the lower portion of the Chesapeake Bay in Hampton Roads today and Friday could be comparable to the surge after Hurricane Isabel in September 2003. That was a nightmare.

I remember that several individuals who were responsible for maintaining the floodgates on the tunnels lost their jobs after Hurricane Isabel because when it came time to put the gates down, they didn’t work. During and after that 2003 hurricane, we were without power for days. There was extensive tree damage in the neighborhood. And the area lost Harrison’s Fishing Pier, a wooden fishing pier that had been erected in Ocean View in 1955. My dad spent many summer nights fishing from that pier.

Individuals are being asked to stay off the roads except for emergencies, which is good since much earlier this morning, Norfolk Public Schools was still planning to open with a two-hour delay. I don’t think so . . . Crazily enough, several key places tried to stay open this morning, like the Norfolk Courts, so people tried to make it to work in downtown Norfolk, which is always flooded, only to hear on the radio that the courts had closed. I don’t think that the people making these decisions were in the right locations to see just how bad it is out there. Unbelievable.

And even with the obvious dangers, people are having to be told not to go in the water. Don’t surf or bodyboard. It would seem to be so obvious that you don’t put your body in water that is churning and out of control, but every single time someone goes out into the water. I really don’t understand that mindset: extreme sports of death wish?

Here is some footage of Chick’s Beach, which is a familiar local beach about seven miles down the road. The date on the video says November 9, but it was actually shot this morning. Pretty awesome stuff:

I was up at 4:30 this morning, but I did manage to get some sleep. Still very erratic, but duration is longer. About an hour and then awake, and so on for about 7 hours off and on. I am actually more tired at the moment than I was yesterday morning after much less sleep.

I’ve already typed a paper for Brett and sent off a very long e-mail letter to George Washington University requesting a formal grade change. Long story, not worth going into, but it’s been bugging the crap out of me, so I decided to do it.

That’s about all for the moment. Just wanted to let you know that we haven’t suffered any damage, although I’ve been hearing sirens all night. We’ve kept power, and the roof is keeping us dry.

I’ll leave you with this link to MSNBC coverage of the storm (which for some reason I could not get to show up here): Storm makes mess of Southeast Coast