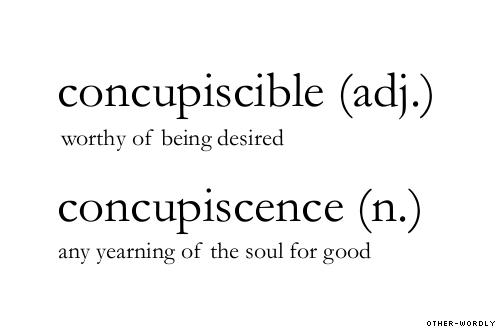 The first time I came across the word concupiscent was in the following poem by Wallace Stevens. I have loved the poem ever since and forced my freshmen to read it every semester, and they would say, “But what does it mean,” and I would say, “Think about it. How can one be an emperor of something that does not last?”

Aside: Stevens said that he thought the word concupiscent was made up . . .

I’m tortured and torturous that way . . .

The Emperor Of Ice-Cream

Call the roller of big cigars,
The muscular one, and bid him whip
In kitchen cups concupiscent curds.
Let the wenches dawdle in such dress
As they are used to wear, and let the boys
Bring flowers in last month’s newspapers.
Let be be finale of seem.
The only emperor is the emperor of ice-cream.

Can’t get this song out of my head: “In the Garden” by Royal Wood