When I saw the editorial cartoon, I will admit that my first response was incredulity: No one in 2009 could possibly be this obtuse. But wait, it’s Rupert Murdoch’s gang at The New York Post, so immediately, I regroup and realize that yes indeed, there are people who can be and are this blockheaded, this blatantly over the top, this far to the right that they no longer can see the horizon.

What am I ranting about? If you don’t know, please, let me share with you this delightful bit of editorial humor: 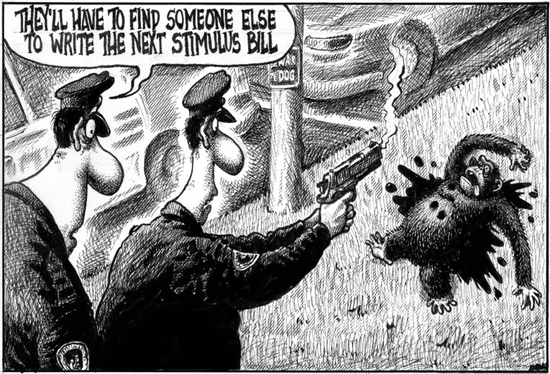 The drawing, from cartoonist Sean Delonas, is at best, tasteless, at worst blatantly racist.  And no, I am not over-reacting here.

No one can deny the fact that for years, African Americans have historically been likened to monkeys. The author of the Stimulus Bill is our nation’s first president of color, Barack Obama. Need I draw a line from point A to point B? Or is the implication that the Stimulus Bill is so bad that a chimpanzee could have written it? Either way, it’s an insult to the President.

Not to mention how insensitive the cartoon is to the poor woman in Connecticut whose face was mauled. The cartoon is based on the horrific event of the woman in Connecticut being attacked by a friend’s pet chimpanzee, resulting in the chimp being shot to death by police officers. In that case, the officers had no choice as the woman who was attacked was severely hurt, and the chimpanzee began to attack an officer. However, I am finding it very hard to connect that horrible event to the Stimulus Bill, no matter how much I work to draw incongruous connections.

Delanos told CNN that racism allegations were  “absolutely frigging ridiculous.” But he is not content to stop there. He continues: “It’s about the economic stimulus bill. If you’re going to make that about anybody, it would be [House Speaker] Pelosi, which it’s not.”

Let me see if I understand: the dead chimpanzee is Nancy Pelosi, and that’s supposed to be better somehow?

No matter how you turn this thing around, spin it, move it, try to justify it, it just doesn’t work. The heart of the matter is that the drawing and its publication are rude. No matter how it is interpreted, it is morally objectionable and in bad taste.

In the end, The Post is being picketed; rumors are that Rupert is not happy, and even insiders at the paper are writing not me e-mails to gain distance from this disgrace.

It just makes me tired all over when people still fail to realize that the election of 2008 was about more than Obama and McCain. It was about people being really tired of things as they were, tired of people being treated as outsiders because of otherness, tired of war, tired of poverty, tired of the U.S. ranking among third world countries for infant mortality. Tired of all of these things. And I think that their tolerance for intolerance is probably reaching its limits.

Perhaps people like Delanos might want to take that into consideration. But more likely than not, he will continue to be hebetudinous when it comes to an awareness of others.