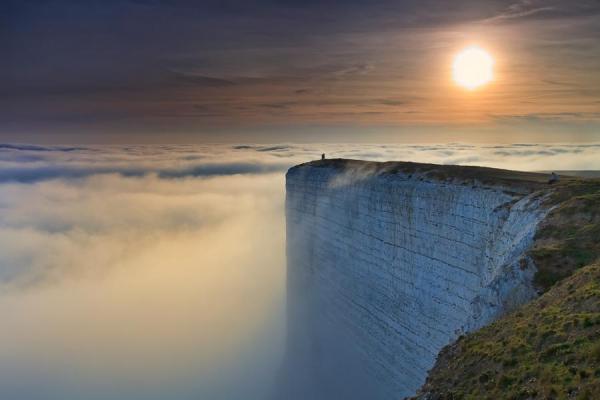 “Sometimes, when one is moving silently through such an utterly desolate landscape, an overwhelming hallucination can make one feel that oneself, as an individual human being, is slowly being unraveled. The surrounding space is so vast that it becomes increasingly difficult to keep a balanced grip on one’s own being.” ~ Haruki Murakami

I’m not even certain as to where I should begin to pick up the tale that has been my life over the last week and a half. I was finally able to stay connected long enough to put together the two posts that I had drafted on Word. Both are backdated to the time on which they were actually written, but so much more has happened.

As I write this, my mother is in the hospital where she has been since the very wee hours of Tuesday morning. She developed blood clots in her broken leg, and they traveled to her lungs. On Monday evening, I noticed that her leg was very swollen and filled with fluid. I suspected clots, but she did not want me to call 911 again as the EMTs had just been to the house two nights before (more on this later). I reluctantly agreed not to take her in as long as she woke me if anything changed.

Around 4 a.m. she yelled my name. I took one look at her entire leg, down to her big toe, all of which were twice the normal size and called 911. This time they took her to DePaul hospital instead of Leigh; however, I went to the Leigh ER as I did not know about the change. Once I got to Leigh, someone came out and asked my name and told me about the mixup. I broke the land speed record traveling from one ER to the other.

Very long story short, they finally put her in a room around 11 a.m. where she has been since; she will be moved soon to a rehab facility to continue treatment and receive physical therapy for her leg. All of this has really taken a toll on her mental state, which in turn is passed along to me in the form of panicked telephone calls during the times when I am not at the hospital with her.

The first night that my mother was in the hospital, the hallucinations began again in earnest. She called me and told me that someone was trying to get into her room, that someone was having a party next door, that children were running down the hall screaming, that someone was knocking on her window asking to be let in (third floor room). She did not want me to say anything to the nurses because they would hurt her.

Three nights ago, she called and told me that she wanted me to listen to the noise and then held the phone up in the air. When I told her that I couldn’t hear anything, she became furious. She said that she was going to call 911, call a taxi, call her neighbor, and she was going to get the hell out of that place.  She wanted me to bring her purse. I refused. The conversation ended with her saying to me, “When you find my dead body somewhere, then you’ll have to live with that the rest of your life.” Turns out my mother can be even meaner when she’s hallucinating.

On Friday, I stayed at the hospital for hours waiting for the doctor who was supposed to come by, and luckily it was a female physician with whom I had spoken with on Wednesday morning. She explained the condition as sun downing, something that happens to people who are in the hospital and begin to exhibit symptoms such as mom’s in the evening. Sometimes sun dower syndrome is associated with Alzheimer’s, but not always.

The doctor spoke with my mother about going to a rehab facility (something my mother had already decided quite firmly that she had not intentions of doing as she just wanted to come home). The doctor pointed out that since my mother is still on blood thinners, if she came home and fell, the chances of causing internal bleeding were good, and she pointed out that I could not do anything for internal bleeding. Finally, between the two of us, we convinced mom that a rehab facility would be a good thing.

Can I just tell you how good it was to cross that particular hurdle?

Currently, she is being given seroquel at night to help with the night terrors, and thankfully, she did not call me last night, which meant that I slept, very heavily I might add.  I decided to give myself time to write this morning before tackling anything else, hence the current, up-to-date post.

I do understand why my mother does not want to be in the hospital. Who does, really? It’s the luck of the draw if you are going to have a nurse who is compassionate versus one who is snotty. And regardless of their dispositions, they are all overworked, which means that they may tell their patient that they are going right now to take care of X, only to return an hour later, having completely forgotten the request.

After my last hospital stay post back operation, I don’t know that I ever want to be in a hospital again. My mother is chomping because they are keeping her completely immobile with a catheter and some are treating her as if she is demented. She told me that someone came into her room to ask her what month it was, and she told them December. She knew the month, but she just wanted to fuck with them.

I reminded her that if she keeps doing things like that, those who don’t know her personality may be inclined to think that she really is out of touch with reality. She maintained that if they are going to torture her, she is going to mess with them.

I did finally have to make someone put a note in her chart that before being admitted, she was mobile, using a walker and standing on her own.

“Funny how life is so like surgery . . . sometimes you can make that rocky davis in that right lower quadrant.. and then there are those days when your bowel ruptures and spells into your peritonium and all you are left with is intense pain and sepsis . . . oh brother, my kingdom for a tenblade when that happens !” ~ Dr. David Morgenstern, ER, “Let the Games Begin”

So getting back to the second ER visit, the one that happened the Sunday before the third visit (think it was Sunday, things are blurring together). On Wednesday, October 13, my mother developed diarrhea (too much information, I know). But after three days, of this, I knew that she was dehydrated: I could pull the skin on her hand, and it would stay raised and pinched.

I called her pcp’s emergency service and spoke with the triage nurse, recited the increasingly bad symptoms. She instructed me to get her to the ER, reaffirming what I thought in the first place. Mom, of course, did not want to go. I called for another ambulance as I was alone, and there was no way that mom could have assisted me in getting her to the car. She was taken to Leigh ER again, and pumped full of fluids and potassium. She was diagnosed with c diff (clostridium difficile), which is a microorganism that normally resides in the GI tract and only becomes a problem when it decides to go postal and wreak havoc with the bowels by producing toxins in the GI tract that result in severe infectious diarrhea and inflammation of the large intestine.

Regardless of the c diff, this was still an atypical ER visit in that my mother was joking around with everyone. I think that she was just glad not to be sick to her stomach any more. The more fluids she received, the better her mood. We got home sometime that night, and Corey and his mother were at mom’s house. My mother slept that night.

“Writing is a form of therapy; sometimes I wonder how all those, who do not write, compose, or paint can manage to escape the madness, the melancholia, the panic fear, which is inherent in a human condition.” ~ Graham Greene

So here we are:  Mom is recovering from c diff, a broken tibia, night terrors, and blood clots.

In between all of this, Corey’s mom came to town for a few days. Corey was off work, so he was able to spend time with her, but I only saw her during breakfast on Sunday morning and a little bit in between. Everyone (family) got together on Tuesday night for dinner at P. F. Chang’s, but I was unable to go as Mom’s was having too many issues.

In the past few days, I have had a few good things happen: I have found a new musician, Ólafur Arnalds, who is from Iceland. Beautiful music. I have also had an Internet connection long enough to post. The other thing is that I have had some sleep, some even in my very own bed with my husband and dogs.