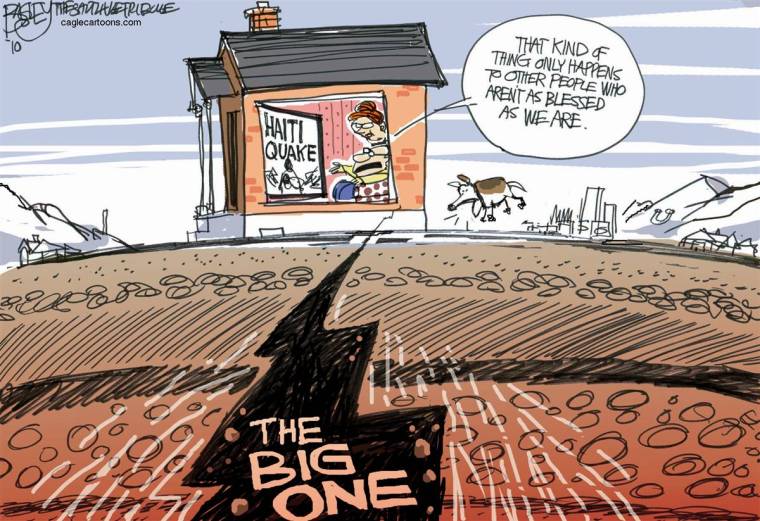 Political Cartoon by Pat Bagley of The Salt Lake Tribune

“Mr. Robertson, Mr. Limbaugh, your lives are not worth those of the lowest, meanest, poorest of those victims still lying under the rubble in Haiti tonight . . . You inspire only stupidity and hatred.” ~ Keith Olbermann on Countdown, January 13, 2010

Hello all of you Dittoheads out there. I know that you are lurking, just waiting for some left-wing liberal nut job such as myself to badmouth your idol. You won’t come out in the open, of course, because that might mean engaging in open discourse with someone who uses logic, facts, and sanity (okay, the sanity part might be going too far), but you get my point.

Or most probably you do not. You do not see anything wrong with douchebag Rush Limbaugh saying that this situation in Haiti was perfect for the Obama administration because they will use it to gain credibility with “both light-skinned and dark-skinned black community in this country. It’s made to order for them.”

Dick-of-the-day Limbaugh says that the crisis will allow Obama to play up his compassionate side. Funny, I never thought that Obama’s compassion needed to be brought out more, that is unless Limbaugh is insinuating that Obama only shows compassion for black people, which would actually make sense using Limbaugh logic. But Limbaugh was not content to play the supposed race card, he had to add more insult to injury by suggesting that aid to Haiti was superfluous: “We’ve already donated to Haiti. It’s called the U.S. income tax.”

I’m not going to post the video of Limbaugh’s inanity, but I will provide a link to a vid on politico.com just in case you have not seen this for yourself. For the full transcript of this broadcast (from which I drew my Limbaugh quotes directly), you need to go to Limbaugh’s direct site.

Rush supporters are already girding their loins, issuing statements that his comments were taken out of context, that he just didn’t want people to donate money to the Red Cross via the White House (because everyone knows that President Obama will take that money and buy a suit for Michelle or something equally preposterous). Right. By the way, the President directed people to the White House site to get information on how to donate, a little discrepancy there between what the POTUS said and what Limbaugh heard.

On a site that shall remain unnamed, one poster said that the issue is about the president and not Haiti because President Obama mentioned slavery in his speech to “keep slavery in the minds of the (U.S.) people.”  All righty then.

Have to love logic like that. There is no arguing with such fallacies. I mean, criticize Obama because he didn’t speak out about the Christmas-day panty-bomber for three days . . . Hello? How long did it take for Bush to do anything about Katrina? Let’s get real here. Thankfully, no one died because of that idiot on the airplane. How many have died during the last 48 hours in Haiti?

A refresher on Limbaugh and Haiti if you please: In May of 2009, the ever-obstreperous blowhard jabbed at former President Clinton’s appointment as U.S. Special Envoy to Haiti: “I’m just gonna tell you, if I was named envoy to Haiti, I’d quit government. Envoy to Haiti? You can’t even pick up a prostitute down there without genuine fear of AIDS.”

For real? Is there anything in that man’s brain but leftover oxycontin? Having sex with a prostitute is a risky business anywhere in the world.

Look. What is needed here is human compassion, people, or in President Obama’s words, doing things “for the sake of common humanity.” Stop playing politics when people’s lives are at stake. I mean, what does the President’s brother or the Nobel Peace Prize have to do with Haiti?

May I just pause here to remind everyone with any grain of decency that Limbaugh is using as fodder for his broadcast a country that has seen the complete and total devastation of its capital’s infrastructure (such as it is), its population wandering the streets aimlesslessly without drinking water or shelter of any kind, and mortality estimates topping 100,000, all from a natural disaster that could not have been prevented.

“That’s not the attitude that expresses the spirit of the president or the American people, so I thought it was a pretty stunning comment to make.” ~ White House Adviser, Valerie Jarrett 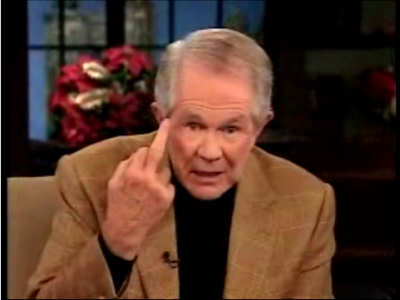 But let’s not forget that bastion of all things holy, televangelist Pat Robertson, who avers that the Haitians brought on their misfortune. Now those of you who keep up with these things know that Robertson is a great one for blaming misfortune on the victims: the victims of Hurricane Katrina, the victims of 9/11; in those instances Robertson, in his lunacy, decried that “We have insulted God at the highest level of our government. Then, we say, ‘Why does this happen?’ It is happening because God Almighty is lifting His protection from us. Once that protection is gone, we are vulnerable because we are a free society.”

There you have it: Robertson’s personal doctrine. The victims died, were killed, were destroyed because, in Robertson’s interpretation, our “free” society calls for separation of church and state, allows abortion, acknowledges gay rights, and such a society deserves a good smiting by god. In other words, if the people don’t act/vote/behave according to Robertson’s interpretation of the way, then begone and be damned.

My personal favorite moment of Robertson lunacy came when he said that the citizens of Dover, Delaware were SOL if something bad happened because they had “voted God out of [their] city” (700 Club broadcast on 11-11-05). No, Pat. I don’t think that god was actually on the ballot that day.

I alluded to Robertson in my previous post, but tonight I want to share some of his now infamous statement on exactly why the people of Haiti are now suffering death, disease, displacement, and despair:

And you know, Christy, something happened a long time ago in Haiti, and people might not want to talk about it, they were under the heel of the French, uh, you know, Napoleon the third and whatever, and they got together and swore a pact to the devil, they said, we will serve you, if you get us free from the Prince, true story. And so the devil said, ‘OK, it’s a deal.’ And they kicked the French out, the Haitians revolted and got themselves free, and ever since they have been cursed by one thing after the other, desperately poor. . .

Of course Robertson’s people were quick to try to clean up the mess made by the dotty proselytizer, stating that Robertson’s “compassion for the people of Haiti is clear. He called for prayer for them.” That he did, just seconds after saying that they had made a pact with the devil. I’m pretty sure that’s what is known las desventajas anulan los beneficios, i.e., invalidation. (Click here for the complete article on Limbaugh and Robertson on politico.com.)

George Harrison’s “Give Me Love”

Political Cartoon by David Fitzsimmons of the Arizona Daily Star

Haiti: How to Help: click this link for a list of charities accepting donations as well as information on making donations.

If you would like to file an online complaint with the FCC, click this link. It’s a very simple form, and only takes a few minutes to complete. To find out what station in your area airs Rush Limbaugh, click here (Unfortunately, it’s Limbaugh’s site; I couldn’t find another site that listed all of the stations on which he airs). Be sure to put in Clear Channel Communications Syndication as they employ the ignoramus. The air date was January 13, 2010.