“O, that way madness lies; let me shun that;
No more of that.” ~ Shakespeare, King Lear (III, iv)

The Legal Definition of Rape (as taken directly from legal-dictionary.com):

Historically, rape was defined as unlawful sexual intercourse with a woman against her will. The essential elements of the crime were sexual penetration, force, and lack of consent. Women who were raped were expected to have physically resisted to the utmost of their powers or their assailant would not be convicted of rape. Additionally, a husband could have sex with his wife against her will without being charged with rape. Beginning in the 1970s, state legislatures and courts expanded and redefined the crime of rape to reflect modern notions of equality and legal propriety.

Many states also have redefined lack of consent. Before the 1970s, many courts viewed the element of force from the standpoint of the victim. A man would not be convicted of rape of a competent woman unless she had demonstrated some physical resistance. In the absence of physical resistance, courts usually held that the sexual act was consensual. In the early 2000s in many states, the prosecution can prove lack of consent by presenting evidence that the victim objected verbally to the sexual penetration or sexual intrusion.

Lack of consent is a necessary element in every rape. But this qualifier does not mean that a person may make sexual contact with a minor or incapacitated person who actually consented. Lack of consent may result from either forcible compulsion by the perpetrator or an incapacity to consent on the part of the victim. Persons who are physically or mentally helpless or who are under a certain age in relation to the perpetrator are deemed legally incapable of consenting to sex. (emphasis mine)

“Today’s milestone is human madness. Politics is a part of it, particularly in its lethal outbursts.” ~ Julia Kristeva

I’ve been doing a slow boil* for a few days now as a direct result of those anti-choice pecker-heads in Congress, you know, the ones behind the proposed No Taxpayer Funding For Abortion Act (follow link for full text of bill as well as list of sponsors), which would effectively set back women’s rights over three decades to a time in which it was considered impossible for a husband to rape his wife, a time during which women who didn’t fight tooth and claw weren’t considered to have been really raped, a time in which saying no could be construed as really meaning yes, a time during which a woman’s wardrobe could be construed as code for “come and get me.”

Essentially HR3, which bone-head Boehner says is “one of our highest legislative priorities,” redefines rape as “forcible rape.”

No knife, no gun, no bruises, no wounds = no rape

Wee bit antiquated? Ever hear of Rohipnol people? But this is the kicker: 173 members of Congress,** including 16 women, support this bill. Boehner claims that current law “does not reflect the will of the people.”

Excuse me? The people? You mean the ones with penises? The ones who can never ever ever get pregnant against their will? Oh, right, those people. 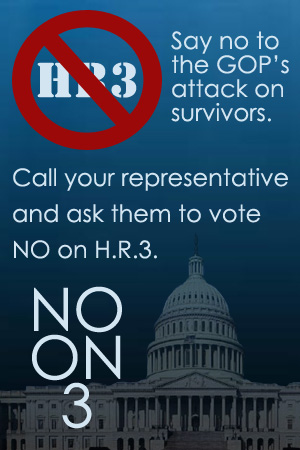 According to Steph Sterling, a lawyer and senior adviser to the National Women’s Law Center, “It speaks to a distinction between rape where there must be some element of force in order to rise to the standard, and rape where there is not . . . The concern here is that it takes us back to a time where just saying no was not enough.”

At stake is the Hyde Amendment (enacted and renewed since 1976), which “prevents some federally funded health-care programs from covering abortions. For years, it has allowed exemptions in cases of rape and incest, and when the life of the woman is threatened.” In sum, Hyde excludes abortion for people receiving Medicaid (with exceptions as noted). Hyde also excludes coverage for federal employees with government-provided health insurance, (e.g., the military).

According to thinkprogress.org, by narrowing the Hyde Amendment language, “Republicans would exclude the following situations from coverage: women who say no but do not physically fight off the perpetrator, women who are drugged or verbally threatened and raped, and minors impregnated by adults.” The measure would also raise costs for businesses who want to offer employees insurance plans with abortion coverage, by eliminating health care tax deductions and benefits that have long been a part of federal law.***

One of my personal Congressional faves, Rep. Debbie Wasserman Schultz (D-FL), wasted no time in letting her GOP colleagues know how “absolutely outrageous” she views this intrusive bill: “To have H.R. 3, the Republicans’ third most important priority, say that rape cannot be an exception to federal funding for abortion . . . sends an incredibly strong message to women.”

“To suggest that there is some kind of rape that would be okay to force a woman to carry the resulting pregnancy to term, and abandon the principle that has been long held, an exception that has been settled for 30 years, is to me a violent act against women in and of itself . . . Rape is when a woman is forced to have sex against her will, and that is whether she is conscious, unconscious, mentally stable, not mentally stable,” the four-term congresswoman added.

Consider, if HR3 were to pass, victims of of incest and statutory rape resulting in pregnancy would be unable to use Medicaid to pay for an abortion, and if the victim were covered under her parents’ health insurance policy, HR3 could effectively make it impossible to use that private insurance by not allowing the parents to “use money from a tax-exempt health savings account (HSA) to pay for the procedure. They also wouldn’t be able to deduct the cost of the abortion or the cost of any insurance that paid for it as a medical expense.”

As for the incest exception under Hyde, the proposed bill would only allow federally funded abortions if the woman is under 18. Grandaddy’s little secret could remain his secret under the ambiguously arcane and archaic language of HR3.

I’ve said it before, and I will scream it to the rafters if I have to: People with penises have absolutely no right to make decisions for those without said appendages, especially when it comes to matters of health.

Keep your frigging laws of my body.

*If you want to skip the ranting and just go to the sources, here is a list of the ones consulted in writing this post:

********************
**Unfortunately, as had been reported in some sources, Daniel Lipinski is not the only male Democrat (no female dems) supporting this appalling rewrite on the definition of rape under the guise of federal funding for abortion. Here is the most recent list found, which was found on Amadi Talks

If you wish to contact any of these cavement (dems or repubs), you can go here to find contact info. If I have omitted any names or listed anyone in error, please let me know.

More from Steph Sterling clarifying this aspect of HR3:

So what would this mean for a real family?  Take a father of three working as an assembly lineman who loses his job when his manufacturing plant closes.  Right now, he’s eligible for the Health Coverage Tax Credit to help with the costs of his $13,770 premium.  But, because his insurance plan included coverage of abortion—even though he never knew about this benefit and no one in his family ever used it—H.R. 3 would suddenly make him ineligible for the benefit and would cost him $11,236.

Other tax benefits are on the line, too.  Right now, a woman who makes $25,000 is eligible to deduct any amount over $1,875 she spends on health expenses, including her insurance premiums, from her taxable income.  If H.R. 3 were enacted and her health insurance plan includes coverage of abortion, she would lose a $1,731 deduction.  More than 7.5 million families claim this particular medical expense deductions—and each of them would lose the deduction if their plan covers abortion.