Reblogged from Death and Taxes:

Here are 18 uncommon or obsolete words that we think may have died early. We found them in two places: a book called The Word Museum: The Most Remarkable English Words Ever Forgotten by Jeffrey Kacirk, and on a blog called Obsolete Word of The Day that’s been out of service since 2010. Both are fantastic— you should check them out.

Snoutfair: A person with a handsome countenance — The Word Museum: The Most Remarkable English Words Ever Forgotten by Jeffrey Kacirk

Pussyvan: A flurry, temper — The Word Museum: The Most Remarkable English Words Ever Forgotten by Jeffrey Kacirk

Wonder-wench: A sweetheart — The Word Museum: The Most Remarkable English Words Ever Forgotten by Jeffrey Kacirk

California widow: A married woman whose husband is away from her for any extended period — John Farmer’s “Americanisms Old and New,” 1889

Groak: To silently watch someone while they are eating, hoping to be invited to join them – www.ObsoleteWord.Blogspot.com

Jirble: To pour out (a liquid) with an unsteady hand: as, he jirbles out a dram — www.Wordnik.com

Curglaff: The shock felt in bathing when one first plunges into the cold water — John Jamieson’s Etymological Scottish Dictionary, 1808

Spermologer: A picker-up of trivia, of current news, a gossip monger, what we would today call a columnist — The Word Museum: The Most Remarkable English Words Ever Forgotten by Jeffrey Kacirk

Tyromancy: Divining by the coagulation of cheese — The Word Museum: The Most Remarkable English Words Ever Forgotten by Jeffrey Kacirk

Beef-witted: Having an inactive brain, thought to be from eating too much beef. — John Phin’s “Shakespeare Cyclopaedia and Glossary,” 1902

Queerplungers: Cheats who throw themselves into the water in order that they may be taken up by their accomplices, who carry them to one of the houses appointed by the Humane Society for the recovery of drowned persons, where they are rewarded by the society with a guinea each, and the supposed drowned person, pretending he was driven to that extremity by great necessity, is also frequently sent away with a contribution in his pocket. — The Word Museum: The Most Remarkable English Words Ever Forgotten by Jeffrey Kacirk

Englishable: That which may be rendered into English — John Ogilvie’s “Comprehensive English Dictionary,” 1865

Bookwright: A writer of books; an author; a term of slight contempt — Daniel Lyons’s “Dictionary of the English Language,” 1897

Soda-squirt: One who works at a soda fountain in New Mexico — Elsie Warnock’s “Dialect Speech in California and New Mexico,” 1919

With squirrel: Pregnant — Vance Randolph’s “Down in the Holler: A Gallery of Ozark Folk Speech,” 1953

Zafty: A person very easily imposed upon — Maj. B. Lowsley’s “A Glossary of Berkshire Words and Phrases,” 1888

Okay. Let me just pause here. Tyromancy, the divining by the coagulation of cheese? Does this mean that I can take a tub of cottage cheese, pour it onto a table, and see into the future? This seems just as foggy as Professor Trelawney’s crystal balls. And queerplunger? People used to make money by pretending to drown?

Admittedly, I have groaked before, or is that been a groak? But the most perfect one of all? Hands down, it’s Resistentialism! You all know of my penchant for anthropomorphism, so it’s nice to know that another words describes the persnickety nature of inanimate objects.

“Only one thing remain[s] reachable, close, and secure amid all losses: language. Yes, language. In spite of everything, it remain[s] secure against loss.”

I Can Still See You

I can still see you: an Echo,
to be touched with Feeler-
Words, on the Parting-
Ridge.

Your face softly shies away,
when all at once there is
lamp-like brightness
in me, at the Point,
where most painfully one says Never.

Yes, I’m cheating, doing a bit of back posting to fill in days on which I was unable to post. This time, I’m using words found on a new site that I discovered: Other Wordly, which is filled with strange and lovely words, not all from the English language. And you know how I do love my words. 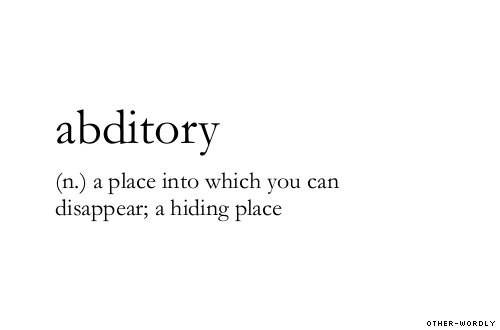