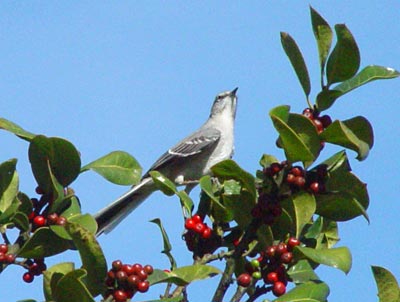 Every morning, a little before dawn, a mockingbird sits in the tree right outside my bedroom window and serenades me. Granted, he probably is totally unaware of my presence, but I like to think that these songs are mine alone. His morning song consists of about 20 separate sounds, that I’ve been able to discern, and he will repeat his song for several minutes at a time.

I really enjoy listening to him as he performs. It’s a languid way to meet the break of day. Usually, I awaken to his sounds around 5 and listen for about 15 minutes before drifting back to sleep. I have to say that it’s much nicer than a piercing alarm clock, especially these past few mornings when most sounds make me cringe from sheer pain.

Our area of the U.S. is actually a great place for backyard birdwatching. And my backyard in particular is a great spot because we live fairly close to a marsh and have a large oak in the backyard as well as several bushes with berries. Until just a few years ago, I kept feeders on the back porch especially for the purposes of spying on the birds. However, when we replaced our roof a few years ago, the overhang to the back porch was torn down, and we haven’t gotten around to putting up the trellis that I want, so that I can plant a new Jasmine vine and hang feeders and wind chimes.

Aside from the trellis, I keep pestering Corey for a new bird feeder, although granted, it’s a purchase that isn’t too high on the priority list.

Directly across from our kitchen window is a camellia bush that serves as a wonderful habitat for several of the birds. I remember one particular fall and winter when I had the feeders out, the finches would start to make such a ruckus around dusk if I hadn’t replenished the feeders. I never knew that wild birds could be as demanding as dogs when it comes to dinner time.

And then there was the time that I hung a lovely dish feeder especially for black-oiled sunflower seeds. Cardinals love those. However, this one mourning dove decided that she wanted to use this particular feeder as a roost. Every afternoon, she would sit in the middle of the dish and take a nap. I had to get a different feeder for the sunflower seeds. The mourning dove became very fat on her hoard of seeds.

Over the years, I have had goldfinches, red-wing blackbirds (beautiful in flight), brown thrashers, cardinals, sparrows, chickadees (one of my favorites), hermit thrushes, marsh wrens, and mourning doves. I have even had a few nuthatches and a downy woodpecker. But the one bird that I have never been able to attract is a hummingbird.

I know that my area is on the hummer’s route because my friend Mari used to get hummingbirds in her backyard. Of course, her neighborhood was a bit more secluded than mine, and hummingbirds do like to return to places that they have visited before.

I’ll never forget the time that all of the birds in the neighborhood were silent and invisible. Then I found out why: sitting on my fence was a hawk. I’m almost positive that it was a Cooper’s Hawk because of the size and markings. Cooper’s hawks eat birds, which could account for the eerie silence that came over the neighborhood while the hawk took up residence.

The hawk hung aroud for a few days and then left. And then just as suddently as it had stopped, the air was filled with bird-song.

I am constantly reminded of the awesome ways in which nature finds a way of protecting itself, and my backyard birding is just one of my small windows into a rainbow spectrum of hues and melodies as moving and tender as Mozart.

Once, in April, my husband brought me handfuls of lilacs

he picked from a bush on the far hillside.

He placed them in a teacup next to my bed.

They were his pale purple wish for forgiveness.

When our first daughter was still new from the womb,

he brought me crystal vases of pink roses

and sat them by my bedside.

They were his pastel prayer for her safety.

When our second daughter died,

to cover the top of her small white coffin.

They were our golden Viking horn for her long journey.

Afterwards, my friend taught me to tame the ruby-throated hummingbirds

with trumpet vine and baskets overflowing with fuchsias,

and to call butterflies and bees with plantings of parsley, impatiens, and verbena.

These were the balms she offered for my troubled soul.

Now, many years later, I have come to await the opening of late winter’s first crocus,

and find solace in spring’s sweet alyssum, lavender, and rosemary.

I walk barefoot through the corolla carpet of flowering crabapple and camellia.

These fallen, crimson petals are my life talisman.

At moon fall, I inhale the aromas of jessamine, wisteria, and honeysuckle,

and I awaken to the scents and hues of hyacinth, angelica, and heather.

In time, I will journey on a bier of Joseph’s coat, amid angel’s tears daffodils and forget me not.

These will be the Eden I will carry with me to the land of nod.