“We can spend our lives letting the world tell us who we are. Sane or insane. Saints or sex addicts. Heroes or victims. Letting history tell us how good or bad we are. Letting our past decide our future. Or we can decide for ourselves. And maybe it’s our job to invent something better.” ~ Chuck Palahniuk, Choke

The headache is gone for now. 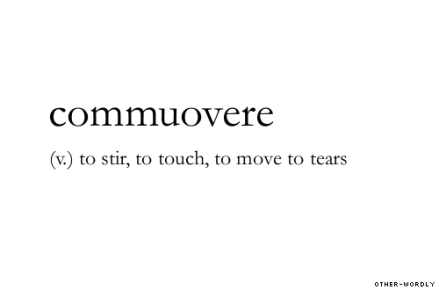 So earlier this afternoon was for cleaning. Corey gathered up clutter from outside and took it to the dump. Brett polished the furniture, and I swept the hardwood floors and cleaned off the dining room table. Eamonn is off at the St. Patrick’s Day parade in Ocean View, a continuation of his 21st birthday celebration. As I’m writing this, Corey is washing his truck; Tillie is helping. Need I tell you how happy he is to be doing this?

Anyway, I’ve done all that I can do for today, so it’s time to write. I’ve been thinking a lot about the word above—commuovere (pronounced kum-wo-ve-ray, with the emphasis on the first syllable). It’s Italian in origin, and while it has no direct English translation, the closest would be to touch, to affect, to stir, to move to tears.

What stirs me, touches me, moves me to tears? Wow. I’m not talking about grief or sadness; rather, it’s a matter of stirrings in the heart. Still, it’s a long and complicated list, but I thought that I would try to share some of the things in life that have moved me or do move me, so much so that I get misty-eyed.

“I think, that if I touched the earth,
It would crumble;
It is so sad and beautiful,
So tremulously like a dream.” ~ Dylan Thomas, from“ Clown in the Moon”

Believe it or not, I don’t cry often, at least not as often as I used to, but I am very sentimental, which is why I don’t watch many movies on the Lifetime channel because they always have very sad endings. But what genuinely moves me, touches that tender spot in my heart? Here is a partial list, starting with movies:

“Certain twisted monsters
always bar the path — but that’s when
you get going best, glad to be lost,
learning how real it is
here on earth, again and again.” ~ William Stafford, from “Cutting Loose”

I remember when I was a child there was this commercial with a supposed Native American man paddling in a canoe amidst pollution. The camera zoomed in on his face to show a single tear. That commercial made me cry, as did the Miller (?) beer Christmas commercial that showed a couple in a sled traveling through the snow with “I’ll Be Home for Christmas” playing in the background, no words. I cried. So here are some of the epic moments in television show that have tugged at my heartstrings:

“Let yourself be silently drawn by the strange pull of what you really love. It will not lead you astray.” ~ Rumi

Another weepy trigger for me is music, and this really depends upon my mood. Anything by Chopin really moves me. Apocalyptica’s “Nothing Else Matters” stops me in my tracks. When I’m crashing, certain pieces of music absolutely slay me, take Annie Lennox’s “Why,” for example. Before the bathtub developed rust holes, I would run myself a hot bath, light the candles, and set up my CD player in the bathroom. Then I would listen to the selected CD and weep until the water became too cold. Very cathartic, in an odd sort of way.

“One must look for one thing only, to find many.” ~ Cesare Pavese

There are other things, of course. Works of art, like seeing Monet’s massive “Water Lilies” for the first time at the Museum of Modern Art in New York. Images of animals that are hurt or sad kill me; I thought that if I saw that commercial for the SPCA with Sarah McLachlan one more time during the Christmas season, I was going to jump off a building. I mean some things are just too much. And then there are the words: passages, poetry, drama, memoirs—far too many to begin listing.

I was once in an Italian restaurant, and one of the servers sang “Nessum Dorma.” I cried into my Napoleon pastry. I used to drive through the cemetery with David Lanz’s “Cristofori’s Dream” cranked all the way up on the tinny car stereo, weeping at the splendor and the sadness.

I don’t know. I say that I don’t cry that much any more, which is true, yet I still can be reduced to weeping when faced with the ineffable, especially in nature, whether it is a breathtaking sunset, or the color of leaves in the fall, or a night sky. Serendipitous instances of kindness and caring, love and tenderness where it seems there should be nothing but sorrow.  I am a walking contradiction, and life is both my passion and my poison.

Music by, who else, Apocalyptica, “Nothing Else Matters.” Turn it up.