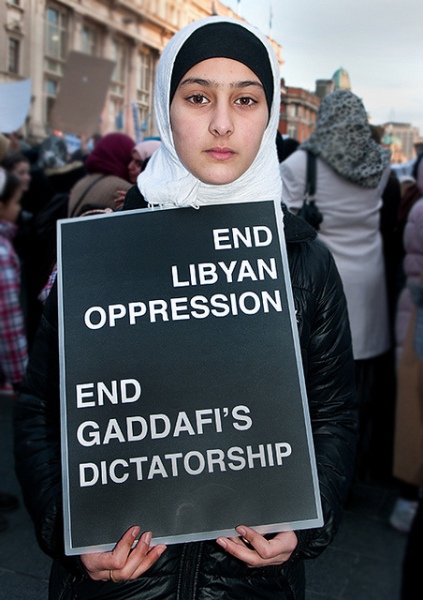 “In a time of universal deceit, telling the truth is a revolutionary act.” ~ George Orwell

Unconfirmed, but via Reddit: “Soldiers in Libya are using .50 BMG bullets on civilians. To put it in perspective, that’s the one on the left.”

“If you are not ready to die for it, put the word freedom out of your vocabulary.” ~ Malcolm X

The so-called February 17 revolution is not like the recent Egyptian protests that resulted in President Hosni Mubarak stepping down. Col. Muammar el-Qaddafi, ruler of Libya for the past 40 years (1969), has always been regarded as a loose cannon: unpredictable, volatile, and deadly. And after Qaddafi’s speech, it’s quite apparent that he does not intend to leave Libya peacefully, and as he put it, he expects to die as a martyr.

The 15-member U.N. Security Council has condemned Qaddafi’s use of violence against the protestors, and in a bold move, Libya’s deputy ambassador to the UN. Ibrahim Dabbashi, openly broke with the dictator, accusing Qaddafi of genocide: “I think the Qaddafi statement was a code for his collaborators to start the genocide against the Libyan people. They are attacking people in all the cities in Western Libya.”

According to ABC News, the Security Council is urging Libyan authorities to “act with restraint, lift restrictions against the press, ensure the safety of foreign nationals and allow immediate access for human rights monitors.”

Various reports put the death toll at anywhere from 500 to over 1,000 individuals. The U.S. and several European nations are urging their citizens to leave the country as soon as possible.

“No dictator, no invader, can hold an imprisoned population by force of arms forever. There is no greater power in the universe than the need for freedom. Against that power, governments and tyrants and armies cannot stand.” ~ J. Michael Straczynski

For another good background piece on the current revolution in Libya, see this article in The Atlantic by Associate Editor Max Fisher. In the meantime, I found the following Hopi quote to be uncannily relevant to what is happening in the world right now:

“You have been telling people that this is the eleventh hour. Now you must go back and tell people that this is the hour! And there are things to be considered: Where are you living? What are you doing? What are your relationships? Are you in right relation? Where is your water? Know your Garden. It is time to speak your truth. Create your community. Be good to yourself. And not look outside of yourself for a leader. This could be a good time! There is a river flowing very fast. It is so great and fast that there are those who will be afraid. They will hold on to the shore. They will feel that they are being torn apart, and they will suffer greatly. Know that the river has its destination. The elders say that we must let go of the shore, push off into the middle of the river, keep our eyes open, and our heads above the water. See who is in there with you and celebrate. At this time we are to take nothing personally, least of all, ourselves. For the moment that we do, our spiritual growth comes to a halt. The time of the lone wolf is over. Gather yourselves! Banish the word struggle from your attitude and your vocabulary. All that we do now must be done in a sacred manner and in celebration. We are the ones that we have been waiting for.” ~ The Elders, Oraibi, Arizona Hopi Nation