“All truths are easy to understand once they are discovered; the point is to discover them.” ~ Galileo Galilei 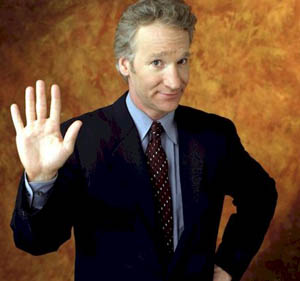 One of my favorite schticks by political humorist Bill Maher is his “New Rule.” For example, “New Rule: Until that oil spill is stopped and stays stopped, after we fill up at a BP station, we get to leave the pump running.”

Or how about this, “New Rule: Just because a country elects a smart president doesn’t make it a smart country. A few weeks ago I was asked by Wolf Blitzer if I thought Sarah Palin could get elected president, and I said I hope not, but I wouldn’t put anything past this stupid country. It was amazing—in the minute or so between my calling America stupid and the end of the Cialis commercial, CNN was flooded with furious emails and the twits hit the fan. And you could tell that these people were really mad because they wrote entirely in CAPITAL LETTERS!!! It’s how they get the blood circulating when the Cialis wears off. Worst of all, Bill O’Reilly refuted my contention that this is a stupid country by calling me a pinhead, which A) proves my point, and B) is really funny coming from a doody-face like him.”

I just could not pass the most recent Maher New Rule on global warming. The original article appeared on Huffington Post. Enjoy.

New Rule: Al Gore must come out with a sequel to his movie about climate change and call it, An Inconvenient Truth 2: What the F*ck Is Wrong with You People?

A bunch of depressing new surveys reveal that people in droves are starting to believe that global warming is a hoax—and this time, it’s not just us. People are always accusing me of hating America and calling it stupid, so tonight I’d like to take a few moments to hate England and call it stupid. Because now English people don’t believe in global warming either. I thought the English were smarter than that. The home of Newton and Darwin. I can’t believe we let these people build our exploding oil platforms.

Even scarier is why people have stopped thinking global warming is real. One major reason pollsters say is we had a very cold, snowy winter. Which is like saying the sun might not be real because last night it got dark. And my car’s not real because I can’t find my keys.

That’s the problem with our obsession with always seeing two sides of every issue equally—especially when one side has a lot of money. It means we have to pretend there are always two truths, and the side that doesn’t know anything has something to say. On this side of the debate: Every scientist in the world. On the other: Mr. Potato Head.

There is no debate here—just scientists vs. non-scientists, and since the topic is science, the non-scientists don’t get a vote. We shouldn’t decide everything by polling the masses. Just because most people believe something doesn’t make it true. This is the fallacy called argumentum ad numeram: the idea that something is true because great numbers believe it. As in: Eat shit, 20 trillion flies can’t be wrong.

Or take this recent headline: “TV weathercasters divided on global warming.” Who gives a shit? My TV weathercaster is a bimbo with big tits who used to be on a soap opera on Telemundo. Media, could you please stop pitting the ignorant vs. the educated and framing it as a “debate.” The other day, I saw a professor from the Union of Concerned Scientists face off against a distinguished expert on Tea Partying, whose brilliant analysis, recently published in the New England Journal of Grasping at Straws, was that we shouldn’t teach climate science in schools because kids find it scary. As they should. I hope they’re peeing in their pants.

The last decade, year, and month are all the hottest on record. Then there’s the killing of the oceans, floods, Category 5 hurricanes, heat waves, giant wild fires, and the vanishing water supply. You know, the little things. And yet deniers say, it’s just a theory. As is gravity. For progress to happen, certain things have to become not an issue anymore, so we can go on to the next issue. Evolution was an issue until overwhelming consensus among scientists made it not an issue.

When I was 6-years-old, it was an issue how babies were born. There were conflicting theories, and there was not a consensus—some thought a stork brought babies, others contended you bought them at the hospital, the Catholic boys said the Holy Ghost brought them—and one kid said that girls had sort of a—as he described it—flap in front and that men put their penises in it. This seemed the least likely. And yet by the time we reached age 11, even though we still had, none of us, actually seen the flap—the consensus of opinion was overwhelming for the penis-vagina theory—it was no longer an issue.

Devastating, worldwide climate change is happening, whether you phone in and vote for it or not. You can’t vote for rain. What’s real is what’s real, and, like it or not, no one can change the nature of reality. Except, of course, with mushrooms.