I’m going on the fifth day of this migraine. I have to tell you that this particular one ranks right up there in the top ten of migraines. On the pain scale—you know, where 1 means that it’s an owie and 10 means that a collision with a bus would feel better—this one is a 43.

Of course, when you withdraw from your body a medicine that is supposed to prevent migraines, it logically follows that the physiological reaction might be a migraine. A migraine, yes. Republicans filibustering for four days in my head? Doesn’t the Geneva Convention have a clause for this?

A Little Light Reading Should Help

In today’s news, there were no fewer than three stories about migraines, one of which was a real beacon of light in my health news. According to a health news story by David Kohn of MSNBC, “Recent studies show those who suffer from something called migraine with aura have double, or perhaps triple, the risk of stroke or heart attack, compared with people who don’t get migraines at all.”

Oh hooray. Another wonderful thing to which I can look forward in my bodily degeneration.

A migraine aura can include anything from spotted vision, to halos, to light streaks. I was once walking with my sister-in-law, when I suddenly saw heat streaks rise from the street and begin to cascade like waves. No, this was not one of my Mexicans in the Walls moments: it was a full-fledged migraine aura. But mine are usually accompanied by heightened sensitivity to smells and light of any kind.

Supposedly, migraine sufferers may have weakened blood vessels, not only in the head but throughout the body, which can raise the risk of stroke or heart attack. Kohn’s article cites a study conducted by the University of Toledo in which neurologist Gretchen Tietjen found that nearly a third of those with migraines had signs of blood vessel damage.

Let’s see . . . had my first migraine when I was about 16, have been having them regularly ever since, at least one a month, some lasting for weeks . . . multiply, carry the seven, divide by 13 and factor in chocolate . . . which leaves me with 2 untouched blood vessels in my right big toe.

The article had lots more great information about possible causes of migraines, but I hurt too much to ingest all of it completely. To read more, go to http://www.msnbc.msn.com/id/29288759/.

Then there was the article about warm weather triggering migraines. I know that when it’s beastly hot here in Hampton Roads, which could happen in July or December, I get migraines. I also know that when there is a dramatic shift in the barometric pressure I get a migraine.

So it is not all in my head, so to speak. A study by Beth Israel Deaconess Medical Center in Boston reveals that “each temperature increase of 5 degrees Celsius — about 9 degrees Fahrenheit — appeared to increase the risk of severe headaches by nearly 8 percent.” The study investigated factors such as air temperature, humidity, barometric pressure, and pollutants. For this complete article, visit http://www.msnbc.msn.com/id/29601879/.

But the most interesting article by far was David Kohn’s personal account of his life with migraines. Apparently, the science and medical writer has been suffering from migraines since childhood, since he was about four. Kohn describes vividly his “quiet agony,” including his wonderful experience with the medicine cafergot (yuck, tried that; didn’t work), butalbital (stopped working for me, too), and finally, his current medication, Imitrex.

Granted, Kohn is unusual in how early in life his migraines started. Kohn mentions the commonly known fact about females suffering more from migraines than men; however, I did not realize that the mean age at which males begin to have migraines is 11 versus 15 for females. Personally, I think hormones have a role in that.

So far, I have tried the following with this particular migraine: ice, heat, darkness, eye masks, pain pills over varying strength, a combination of sudafed and ibuprofen in case it’s sinus related, my twice daily regimen of Axert . . . not to mention whimpering, crying, begging the dogs not to bark, and standing in a very hot shower trying to steam the migraine away. I even persuaded Corey that we needed to have sushi (not to hard to persuade him on that) so that I could get some Omega 3 and wasabi in my body in an attempt to drive out the migraine aliens. No joy there, either.

Need I point out that to date, none of the above have worked. This anvil-like pressure and its accompanying metal workers who are banging out weapons in my head will not be budged. Hephaestus is taking his time casting swords. Which leads me to ponder whether it is impertinent to ask the sword-maker to the gods to take five. Hmm . . . thinks that make you say hmm . . .

I have images of Spartans in tight little man-underwear with heaving pecs coming to my rescue by doing battle with this enemy, but try as I might, Gerard Butler has yet to offer his services. However, Ephialtes, the misshapen would-be warrior, seems to have taken up residence and is currently having a hell of a time keeping the metal smiths company.

If I do manage to fall asleep later, perhaps I’ll dream of Telios  (Michael Fassbender) instead. Here’s hoping. But with my luck, I’ll probably just keep seeing the Inamorta falling over the cliff. (Okay, I’ll admit it, I’m a 300 groupie). 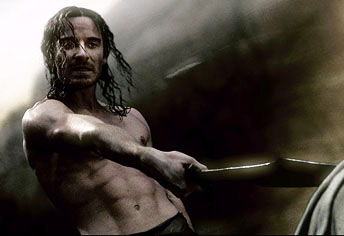 I know that I should end the evening with a hot cup of herbal tea and no chocolate, but the insane side of me still yearns for some Oreos. I will yield to my better instincts, though, and stick to the peppermint tea and maybe some Jello (ooh, living dangerously) and forego that glass of Shiraz that would hit the spot. Besides, tomorrow morning I get to go have vials of blood drained to see how my cholesterol and blood sugars are doing, so I should probably stay on this side of the Hot Gates.

Sometimes it really is best to sit back and let others do the talking.

Many thanks to WillPen’s World for this wonderful link. (Please visit WillPen at http://willpen.wordpress.com/ for more political discussions and interesting posts.)

This was bound to happen. I mean, I half expected it, sort of, but not really. It kind of crept up on me. I’ll confess. I’ve been mainlining for a few months now, and I didn’t really go cold turkey until about Friday. I mean, there was still an abundance on Wednesday. Plenty of it was around. It was just so easy to get. I mean, it was everywhere you looked. A hookup was the easiest thing in the world, so I really wasn’t worried about getting a fix.

Thursday was still good, too. Although, I could sense that things were changing. There was something in the air. And you could see it in people’s eyes: a glassiness. That’s when I realized that it was going to be harder to get my hourly fixes. Because by then, once daily wasn’t enough. I was up to six, seven hours a day, and I often went into the wee hours of the morning.

I wasn’t able to write on Thursday. I mean, there werethings that I could write about, but I just didn’t have it in me. I actually began an entry, but it died on the page, just kind of fizzled out like a defective sparkler on the Fourth of July. 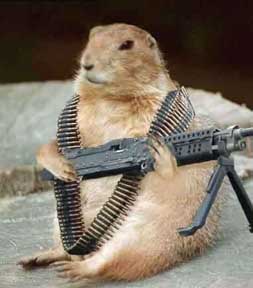 I recognized it for what it was: I was starting to feel the withdrawal symptoms. It wasn’t too bad yet, but the beast from Moria was entering my brain, and I knew that it was coming: a withdrawal/stress migraine. And then, too, I was facing my worst day of the year. So I didn’t force it. I turned off my desk light, and hid under the covers. I tried to read a regular book, but it was so unsatisfying. Even my three hours of MSNBC didn’t soothe me: Hardball, Countdown with Keith Olbermann, The Rachel Maddow Show. Something was missing.

Friday arrived and the culmination of events finally proved to be my undoing. I took to my bed like a groundhog going into hibernation with no intention of emerging until Willard Scott and his Smucker’s jam called me out. I was certain that an invisible ice pick was protruding from my right eye.

On Saturday I finally faced the fact that I had an addiction that had to be faced: I was a political campaign news junkie. And now that Obama was president elect, I had to find a new way to carry on my everyday life. I mean sure, I could still write about politics in my blog, but it wouldn’t be the same. Sarah Palin had scurried back to Alaska with the claim that she had only ever asked for a Diet Dr. Pepper once in a while. John McCain wasn’t talking, and the Republicans had gone into hiding to try to figure out what to do about Senator Stevens. The only truly interesting thing going on was the custody battle over Joe Liebermann, and I had to face the fact that that simply wasn’t enough to feed my habit.

I mean, President-elect Obama gave us a scrap with his first press conference, but it that thirty minutes just wasn’t enough. I realized that it was going to be a long two months until January 20 unless W. did something really interesting, and let’s face it, anything that he tried to do, Obama was going to undo as soon as he took office.

I tried to recapture some of the high by watching Keith Olbermann’s hour-long review of the campaign, twice, but it just wasn’t the same. Who would I mock now that Joe the Plumber had retreated into obscurity? What would I do now that Thelma Drake had finally conceded to Glenn Nye in the 2nd Congressional District? The only things that I had to look forward to were Al Franken’s runoff election and what happened to the felon in Alaska . . .

It’s just not the same. I never thought I’d say this, but I kind of miss Sarah P. But not to worry, I’m sure we haven’t seen the last of her. Until then, I’ll just have to regulate my dosage, and satisfy myself with writing about the usual shenanigans of politics as usual, you know, people like Michele Bachman, Rush Limbaugh, and of course, Sarah P., who doesn’t have sense enough to let a spokesperson issue a statement for her, because she is, after all, a governor, and governor’s shouldn’t go around calling people “jerks” on the record.