“I’m living under water. Everything seems slow and far away. I know there’s a world up there, a sunlit quick world where time runs like dry sand through an hourglass, but down here, where I am, air and sound and time and feeling are thick and dense.” ~ Audrey Niffenegger, The Time Traveler’s Wife

Well, I feel absolutely blah today, sort of enclosed, if that makes any sense. I wasn’t able to fall asleep until 6 a.m., and then I kept having strange visual hallucinations. I woke up with a sore throat and headache.

I started back on a medicine to help me sleep several days ago, but I think that I am not tolerating it well. I have taken this medication before without any problems, but now, I’m having all sorts of strange reactions. I looked up the side effects, and some of them include vivid dreams, increased appetite (no thank yew), feeling hungover the next day (yep, that too), and several other undesirable effects. So last night I did not take the medication, and as a result, I think that I had withdrawal symptoms, and I could not get to sleep.

It just slays me how I have become so sensitive to medications that never bothered me before. So back to the drawing board and back to not sleeping.

“For very sad reasons, human beings, unfortunately, can do really tragic things to each other and these two people went as far out on a limb as you can go.” ~ Tom Kalin, Director of Savage Grace

We watched a movie last night called Savage Grace, starring Julianne Moore. The movie, which is based on the book by the same name, is a true story about the life and death of Barbara Daly Baekeland. After I watched the movie, I did some more reading on the Internet about the Baekeland family. The paternal grandfather was Leo Baekeland, the inventor of the first plastic, Bakelite.

His grandson Brooks married Barbara Daly, a tempestuous woman who suffered from mental illness. The two were unfaithful to each other several times, and Barbara tried to commit suicide four times in attempts to keep her husband from leaving her. However, he eventually left for a younger woman. Their son, Antone, also suffered from what was later diagnosed as schizophrenia.

Mother and son had a somewhat obsessive relationship, with Barbara attempting to “cure” her son of his homosexuality by paying females to have sex with Tony and eventually seducing him herself. Tony first tried to kill his mother by dragging her into the street and trying to throw her under a moving car. A psychiatrist told Barbara that he believed Tony would eventually kill her, but she did not believe that Tony would ever really harm her. Shortly afterwards, Tony killed his mother by stabbing her with a kitchen knife. He then proceeded to order Chinese food.

Tony was found to have diminished capacity and sent to Broadmoor. He was released after ten years and returned to the U.S. to live with his grandmother, who he tried to kill less than a week later. Tony was sent to prison and died in 1981 from suffocation. His death may or may not have been suicide as he was found with a plastic bag over his head.

The movie did not show all of this background because, of course, it is impossible to show everything in a two-hour span. I began watching the movie in an attempt to fall asleep as I did not think that it was going to be very good; however, I just couldn’t stop watching. It was the veritable train wreck waiting to happen. Everyone in this family was disturbed, including the father who denied that there was anything wrong with his son and refused to pay for psychiatric treatment.

“The cause of violence is not ignorance. It is self-interest. Only reverance can restrain violence—reverance for human life and the environment.” ~ William Sloan Coffin

I watched another movie this weekend based on a true story: Dance with a Stranger, starring Miranda Richardson as Ruth Ellis, the last woman to be hanged in the U.K. in 1955. Ellis herself had a hard life, first having a child out of wedlock in 1944, a time in which such a thing immediately tainted a woman’s reputation. Ellis found out that her lover was actually married with a family in Canada, so she was left to raise her son Andy alone. Then Ruth, neé Nielson, married George Ellis in 1950. George Ellis was a drunk and physically abusive. In 1951, Ellis gave birth to Georgina, but by then the marriage was over.

In 1953, Ruth Ellis became the manager of a nightclub. She met David Blakely, a racecar driver. Their relationship was fraught with violence; when Ruth became pregnant by Blakely, he punched her in the stomach, which resulted in a miscarriage for Ruth.

Ruth was also involved with Desmond Cussen, a former RAF pilot. Cussen took care of Ruth and Andy, but Ruth was never able to severe ties with Blakely. In fact, Cussen helped Ruth to spy on Blakely, who was unfaithful to Ruth several times. On the night of Easter Sunday 1955, Ruth Ellis waited outside a pub for Blakely. When Blakely ignored Ruth’s greeting, she moved around the car that he was attempting to get into and emptied a .38 caliber Smith & Wesson into Blakely.

The shooting occurred just ten days after Ellis had miscarried, and she was heavily medicated. Ellis was questioned and brought before the magistrate without having an attorney present. She was examined by a psychiatrist who claimed that Ellis was not mentally ill. The presiding judge ruled out a defense of provocation for Ellis. During her trial at the Old Baily, Ellis became her worst enemy when she said, “It’s obvious when I shot him I intended to kill him.” Ellis was hung three weeks later.

Again, the movie does not delve into all of the facts regarding Ellis, and it ends right after the shooting of Blakely without covering the trial at all. Public reaction to Ellis’s hanging was strongly against, and partially as a result, the United Kingdom abolished the death penalty in 1964.

George Ellis committed suicide three years after Ruth’s death. Her son Andy suffered emotional distress most of his life and killed himself in 1982. Ruth’s daughter Georgina died at 50 from cancer.

What happened to Ruth Ellis is still a matter of contention. The jury was not allowed to find for manslaughter because of Ruth’s confession. However, Ruth was an abused woman who was still very much affected by her miscarriage. Ruth had been provoked by Blakely’s unfaithfulness and his physical abuse, but because of the laws at the time, the jury could not convict her of a lesser sentence, and the death penalty was mandatory.

Ellis’s hanging caused such a stir because she was a beautiful woman, the mother of two small children, and she had never shown any propensity for violence. Once the public face of a criminal condemned to death became so personal, the British public began to openly oppose capital punishment. The Ellis case was referred back to the Court of Appeals in 2003, but her conviction was not overturned or reduced to manslaughter as had been requested.

“Violence is not merely killing another. It is violence when we use a sharp word, when we make a gesture to brush a person, when we obey because there is fear.” ~ Jiddu Krishnamurti

Dance with a Stranger was made in 1985, and Natasha Richardson is radiant, even with platinum blonde hair. Savage Grace was made in 2007, and Julianne Moore’s portrayal of Barbara Baekeland is compelling in its believability.

That I watched both movies this past weekend is purely coincidence as I had never heard of either one, and I found them by accident on cable. However, I am glad that I watched them and then did further research on both of these women.  Both were troubled: Ellis was physically and emotionally abused, and Baekeland was emotionally tormented by her husband. Both women died far too young.

I’m not condoning the actions of either woman. Rather, I offer their stories as reminders of how unkind society was to women, and how few resources used to be available. While there are more avenues for escape and treatment, emotional, physical, and sexual abuse continue to be societal problems that have far-reaching implications, both for those who suffer directly from the abuse and for their children who have no escape from its effects. 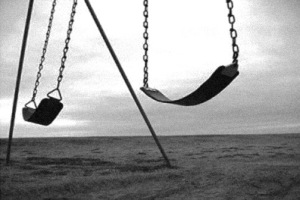 Those in society who say that they simply don’t understand why a woman stays in an abusive relationship have never suffered at the hands of an abuser, have never felt the helplessness nor experienced the complete erosion of self-confidence and self-respect. And the reality is that abuse is cyclic, often being repeated by the abused or the children of the abused.

Unless we learn as a society not to tolerate abuse and violence, the cycle will never end. Until we acknowledge that it is not just with fists but also with tongues that people cause irreparable harm to others, those who suffer will continue to be victims.

If you know of an individual—man, woman, or child—who is being abused, please do not sit by idly, thinking that someone else will intervene. You must be that someone else, lest you allow your humanity to be overshadowed by inaction.

Sorry for the sermon. More later. Peace be with you and yours.

Bird York’s “Have No Fear”