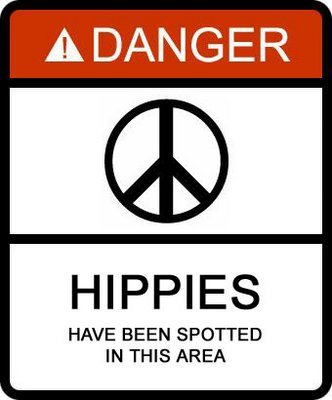 “There is nothing more frightening than ignorance in action.” ~ Johann Wolfgang von Goethe

While perusing the blogroll on blogsurfer.us, I came across a blog that made the following statement: “Understand the Green Movement has always been, among other things, a front for the Eugenics Movement.” Wow. Really? I mean, are you serious?

The post concluded with the following completely inane statement: “Please turn on every light on in your home on March 2th – Earth Hour. Show them you are on to their lies and deceptions.”

I actually had to go back and read the short post from the beginning to make sure that it wasn’t written tongue-in-cheek. Sadly, the poster was serious. I certainly know that my efforts to recycle, conserve water, avoid styrofoam, and other earth-conscious efforts are all done because I believe in eugenics. You know, eugenics, that Hitler-esque concept in which the human population engages in selective breeding to improve the race? Yessiree, I am a whole-hearted proponent of the very policy that would have me cast aside as a mongrel because of my mixed blood. Self-preservation be damned. Let’s clean up the gene pool.

I girded my loins and perused a few other posts on this blog and came across blanket statements such as the following: ” . . . global warming’ is both real and a threat to the very survival of the human race. Global warming is neither real nor a threat . . . Environmentalism  (for their purposes) has nothing to do with the environment and the sooner people understand this the better.”

How could I have been so stupid all of these years, not to realize that the U.N. is a front for Eugenics? Not to understand that there is no such thing as global warming, which should have been obvious to me because we still have winters? Melting ice caps, pshaw. No such thing . . . How could I not know that the “Green Movement is after our children”? By god, I’m going to turn on every light in my house. That will show them, whoever them is. And that huge power bill that I’ll get will really show them . . .

Color me green with nausea over the rampant ignorance of the misinformed. I’m trying to be gentle here . . .

“When ignorance gets started, it knows no bounds” ~ Will Rogers

Along those same lines, I was reading a post that was mentioned by someone in my blogroll (Seeing Eye Chick), and I came across some images and videos that made my hair straighten (can’t curl as it already is). I thought that I’d share. There is this obviously racist one which deserves no explanation: 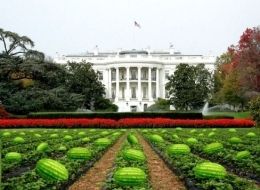 Or this lovely one promoting the use of gun violence: 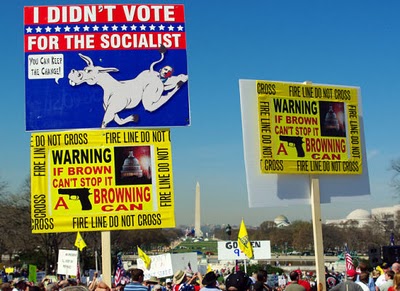 Or this one which is not big on subtlety: 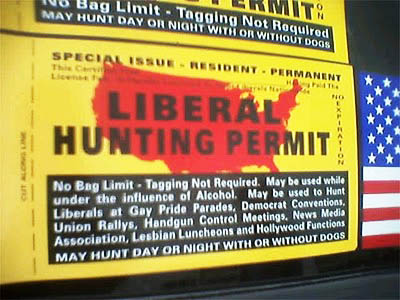 “The evil that is in the world almost always comes of ignorance, and good intentions may do as much harm as malevolence if they lack understanding.” ~ Albert Camus

And finally, let’s close with this wonderful video in which the woman featured is simply giddy over her message. . .

Lovely. Simply lovely. Free speech is a wonderful thing. Too bad the Constitution didn’t include an ignorance caveat.

“The recipe for perpetual ignorance is: Be satisfied with your opinions and content with your knowledge.” ~ Elbert Hubbard

Seriously, though, all of this might actually be funny, entertaining even, if it were not true, if the people yelling, carrying signs, and posting rants did not believe what they are saying.  Listen. I never claimed to have all of the answers, nor have I ever said that my way of thinking is the only way of thinking, and that’s what separates my flaming liberal, left-wing feminist sensibilities from the Tea Baggers, and birthers, and conspiracy theorists: They are so certain that theirs is the real truth, the only truth, and anyone who opposes them is damned for all eternity.

I mean consider: I did not like George Bush as POTUS. I think that he was inept and power-hungry. That being said, I would have stood up when he entered the room, and given the chance, I would have addressed him as Mr. President because that is the courtesy that is is due the President of the United States. It’s called respect for the office, common courtesy, manners. What we are seeing now is a social conflagration that is being fueled and perpetuated by hatred, unmasked hatred for President Obama, Nancy Pelosi, Congressional Democrats . . . insert the name of anyone who opposes.

I would weep and gnash my teeth if I had not already been rendered emotionally bereft of feeling over the current furor.

Red House Painters, “All Mixed Up”