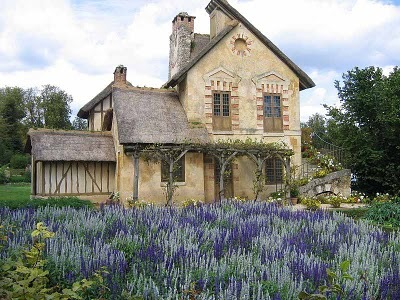 One of My Dream Houses

“The time which we have at our disposal every day is elastic; the passions that we feel expand it, those that we inspire contract it; and habit fills up what remains.” ~ Marcel Proust, In Search of Lost Times

The dogs and I spent some time in the pool today. The other raft did not have a hole in it, thankfully, so I was able to float on my belly. It was really quite nice—the sun, the dogs, the birds, and no other noise.

Tillie the lab has this thing that she does when she’s tired of sharing the pool with Shakes: She goes after his ball and then drops it over the side of the pool, out of his reach. Then she grabs the free ball. I think that she thinks that she can make him disappear in the same way that she makes the second ball disappear. If I scold her, she just looks at me as if I’m telling her she’s beautiful and wags her tail.

Anyway, not much else happening around the homestead today. Corey had third shift last night and then lost his shift today because the boat left at 6 a.m. That’s the way it goes. He worked a whopping 13 hours last week. We try not to dwell on it too much.

I’ve been listening to country music today, which is probably not the best idea as my country playlist is a cliché of country song themes: heartbreak, longing, loss, and regret. So after a few hours of this, I’m feeling like sobbing into my shirt. Of course, the fact that YouTube is acting up and stopping every few minutes to buffer does keep me from becoming completely engrossed in the lyrics.

I know that this computer (Eamonn’s old one) is on its last leg, and maybe after we get the truck fixed we can get the new hard drive installed on my computer. We’ll just have to way to see how all of that goes.

In sitting here, I realize that I don’t actually have much to say tonight. Or perhaps I have many things to say but cannot give them words. It is not one of those situations in which I thought of what to say and then immediately lost the words somewhere in the tangle of my thoughts; rather, it is that the words run too deeply tonight, which has caused my mind to freeze, to stop processing.

It seems that so much is going on: another politician resigning over yet another scandal, blogs supposedly written by women unveiled as being written by middle-aged white men (what, they had nothing better to do than to impersonate a Syrian woman) . . . This world that makes news of how large Kim Kardashian’s engagement ring is—that ring could fund a library for a year or two. The world is going crazy, and quite frankly, I don’t wish to go along for this ride.

I wonder about the most recent flock of college graduates, what the world has in store for them, if anything. Perhaps I am too cynical for my own good, but I would hate to be starting out in this economy, in this world in which so many have so little and so few have so much. I worry about my kids and what kind of world will be waiting for them when they finish college.

If I could, I think that I might spend the rest of this weekend watching all of the seasons of “Dr. Who,” but we don’t have Netflix, so I can’t do that. Or better still, I would take Corey to a dark country bar and slow dance with him to sad songs, just to feel his heart beat against mine. Sometimes it’s good just to feel another person’s heartbeat to be reminded of what it is to be alive.

“A person is, among all else, a material thing, easily torn and not easily mended.” ~ Ian McEwan, Atonement

I remember that when I worked at the museum and I started to feel overwhelmed by things, I would go out into the galleries and just walk. I would gaze into the faces painted so lovingly by the old masters and I would absorb the glorious Impressionists. That was probably the best part of that job—having at my disposal access to such beauty in so many forms. It never failed to calm me, to center me, to make me feel a sense of belonging.

I think that perhaps I am feeling so out of sorts because tomorrow is Father’s Day, and while it is yet another one of those created holidays, it is a bit discomfiting for me. I found myself looking at cards from daughters to fathers. I can’t help it. I don’t want to do it, don’t want to add that little bit of salt, but I do it any way.

Daughters and their fathers . . .

Then too, I must admit that I still harbor a great sadness that Corey and I never had a child together. He is so wonderful with my kids that it makes me feel that I have stolen something from him in some way. We don’t talk about it any more, but I know that he would still love to have kids of his own.

Who knows why things turn out the way that they do . . . why and how fate intervenes, what the fates take away and what they give. Sometimes I feel as if I am just a pebble being tossed in a stream that is moving far too fast for me to keep up. The movement breaks off small pieces, and it polishes me at the same time.

“It seemed to travel with her, to sweep her aloft in the power of song, so that she was moving in glory among the stars, and for a moment she, too, felt that the words Darkness and Light had no meaning, and only this melody was real.” ~ Madeleine L’Engle, A Wrinkle in Time

These things I know:

The Confession of an Apricot

There is a solemnity in hands,
the way a palm will curve in
accordance to a contour of skin,
the way it will release a story.

This should be the pilgrimage.
The touching of a source.
This is what sanctifies.

This pleading. This mercy.
I want to be a pilgrim to everyone,
close to the inaccuracies, the astringent
dislikes, the wayward peace, the private
words. I want to be close to the telling.
I want to feel everyone whisper.

After the blossoming I hang.
The encyclical that has come
through the branches
instructs us to root, to become
the design encapsulated within.

I do not want to hold life
at my extremities, see it prepare
itself for my own perpetuation.
I want to touch and be touched
by things similar in this world.

I want to know a few secular days
of perfection. Late in this one great season
the diffused morning light
hides the horizon of sea. Everything
the color of slate, a soft tablet
to press a philosophy to.