Rumi,  from “A Green-Winged Longing”

So let’s begin the journey home,
with love and compassion for guides,
and grace protecting. Let your soul turn

into an empty mirror that passionately wants
to reflect Joseph. Hand him your present.

Now let silence speak, and as that
gift begins, we’ll start out.

(Version by Coleman Barks from a translation by John Moyne)

“I use this chance to honor the emotions of the nation of Iran and remind them that Iran, this sacred being, belongs to them and not to the fraudulent.” ~ Mir Hossein Mousavi

Today marks the fifth straight day of opposition protests in Iran. Pictures of the protests show people from all walks of life, not just students and intellectuals now, walking side by side, virtually in silence, forming a column of people stretching over five miles long, beginning at Revolution Square in Tehran and ending at Freedom Square.

In case you haven’t been following the news, the protests began after the country’s so-called democratic elections for President were held on Friday. Voters went to the polls from early morning until about midnight, extending the time allotted to cast votes by six hours to accommodate the high turnout. With about 46 million total votes cast, Iran’s Interior Ministry announced the first results indicating  that Mahmoud Ahmadinejad had won about 63 percent of the vote about an hour after the polls closed. The Ministry announced the official results less than a day later. The Friday announcement from the Ministry came just minutes after Mousavi declared himself the winner.

This was after robust campaigning between reformist candidate former Prime Minister Mir Hossain Mosavi and Ahmadinejad in the four weeks leading up to the election. Earlier on Friday, Mousavi claimed victory. Friday evening, Mousavi held a press conference in which he claimed that he had won, and he charged that there were a number of election irregularities. According to an article in The New York Times, since the announcement proclaiming Ahmadinejad’s victory, opposition leaders have made a list of what they call election violations and irregularities.

Perhaps I should point out that these were paper ballots. From 45,000 polling stations. It is highly improbably that approximately 39 million votes were counted by hand in an hour.

Normally, election results are not announced for three days. Another odd thing about this election (among many) was that Supreme Leader Ali Khameini certified the results at 1:38 a.m. on Saturday and called the results a “divine assessment.” It is widely known that Khameini has had an ongoing feud with Mosavi for the past 30 years.

The protests began soon after. And the government crackdown on Internet access, cellular phone usage and text messaging came immediately after the announcement about Ahmadinejad’s victory.

“Take the websites and our cell phones, we don’t give our country to you!” ~ Latest Iranian Protest Slogan

I must admit that when one of my favorite bloggers said to follow him on Twitter several months ago, I gave him a hard time. I believe that my exact words were “Twitter is for sissies.”

When my very dear friend Jammi asked me to join her on Twitter, I told her that I couldn’t possibly handle yet another posting media. But she prevailed, and I joined Twitter almost a month ago. For me, Twitter has been a nice diversion, an easy way to follow Janson’s vacation in Florida, an up-to-date method for staying abreast of what Jammi is doing in Texas.

But recent days have proven me completely wrong in my first assessment of Twitter, and I am here to admit just how wrong I was. Twitter is not just a lightweight social medium for celebrities to post what they are having for lunch. I mean, that may have been the way in which it started, but because of what  is happening now in Iran, Twitter has become one of the only media through which the protestors in Iran have been able to get out their messages about what is currently happening in Iran: real-time messages from real people.

Because of Twitter, people all over the world are getting up-to-the-second updates of exactly what is going on during this crisis. I have read several different statistics, but apparently, the number of Iranians under the age of 30 is anywhere from 60 to 70 percent of the country’s total population, which would account for their tech-savvy in knowing how to bypass IP addresses and how to use proxy servers.

Even though the government has tried to use traditional methods of repressing information—ejecting journalists from the country, jamming satellites (e.g. BBC satelite), imposing a blackout on Facebook, text messaging, and any other social sites—the Green Party protestors have found their way around the blackouts. By Monday, 3,500 videos had been posted to YouTube. Tweets have been unending.

MSNBC has reported that the Iranian government “raised the stakes in the Internet battle on Wednesday by spreading the word that online users could face prosecution and even execution for ‘incitement.'”  An estimated 18 million Iranians use the Internet.

However, Tweets in the last 24 hours have increased in the number of posts claiming that the government has infiltrated the Twitter network, and consequently, Twitter users are advising readers to follow information regarding meeting sites and protests only from reliable (known to be opposition) addresses.

The caliber of Tweets ranges from announcements about which street corners have been designated as meeting sites, to appeals to find out where missing persons have been taken.

As I posted last night, Andrew Sullivan’s Blog, The Daily Dish, has been posting Tweets continuously in an effort to help to keep getting the word out. And the State Department asked Twitter to delay their scheduled maintenance until middle of the night Tehran time so as to allow continued updates from the protesters.

Here is a small selection of Tweets:

this may become a massacre, dear god keep them safe

the gov apparently doesn’t trust the normal police, they are all unarmed with empty holsters!

1 of my friends reports from Azadi that special forces r beating ppl most brutally. lots of ppl r badly injured.

please RT urgent does anyone know whats happening near saiee park? my daughter is near

we only want freedom – we are peaceful – we have no life no future in IRI without freedom.

it’s worth taking the risk, we’re going. I won’t be able to update until I’m back. again thanks for your kind support and wish us luck

Now . . . I hear people are chanting Allohakbar on their roof-tops, on all roof tops, it is stronger than any day [so far].

“I am very angry at myself for being fooled so easily, they got us to vote, which gave them legitimacy, and then they manipulated the results, many are vowing never to vote again.” ~ Comment found on the Daily Dish 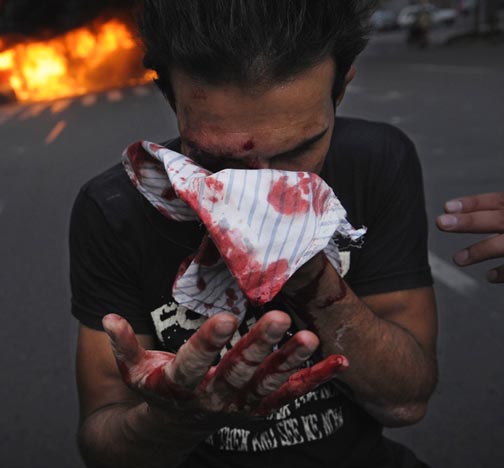 I say not who I really am

in honor of the dead.
Did they suspect this morning that it would be so?
The reason why we are here is like millions of pebbles on a beach
Being tumbled into fine smooth form by ocean waves
The reason why we were asked is not merely fate
It is the megalithic rock from whence we came.
It can’t stay, it won’t stay, it doesn’t want to stay unchanged
Pushing on, reaching the greater perfection of unity.
Little pieces, maybe so— but it strives to be apart to fully understand the concept of wholeness.
A test.
By warring we fail the test—to be repeated till we get it right.
painfully so.

~ by Red Cloud (found on Poets Against War)

Images are taken from http://www.boston.com/bigpicture/2009/06/irans_disputed_election.html  or from Andrew Sullivan’s Daily Dish as indicated.