Today’s Two for Tuesday features poems by American poet Mary Szybist, winner of a Pushcart Prize in 2012; among her other awards are the 2013 National Book Award for Poetry, the 2003 Beatrice Hawley Award from Alice James Books and the 2004 Great Lakes Colleges Association New Writers Award. She is also the recipient of fellowships from the Guggenheim Foundation, the National Endowment for the Arts, the Rona Jaffe Foundation, and the Witter Bynner Foundation. Szybist teaches at Lewis & Clark College

You can read more about her in interviews with The Paris Review and with UVA Magazine. In July of this year Szybist was named the 2019 laureate of The George W. Hunt, S.J., Prize for Journalism, Arts & Letters for outstanding work in the category of Poetry.

Just for this evening, let’s not mock them.
Not their curtsies or cross-garters
or ever-recurring pepper trees in their gardens
promising, promising.

At least they had ideas about love.

All day we’ve driven past cornfields, past cows poking their heads
through metal contraptions to eat.
We’ve followed West 84, and what else?
Irrigation sprinklers fly past us, huge wooden spools in the fields,
lounging sheep, telephone wires,
yellowing flowering shrubs.

Before us, above us, the clouds swell, layers of them,
the violet underneath of clouds.
Every idea I have is nostalgia. Look up:
there is the sky that passenger pigeons darkened and filled—
darkened for days, eclipsing sun, eclipsing all other sound
with the thunder of their wings.
After a while, it must have seemed that they followed
not instinct or pattern but only
one another.

When they stopped, Audubon observed,
they broke the limbs of stout trees by the weight of the numbers.

And when we stop we’ll follow—what?
Our hearts?

The Puritans thought that we are granted the ability to love
only through miracle,
but the troubadours knew how to burn themselves through,
how to make themselves shrines to their own longing.
The spectacular was never behind them.

Think of days of those scarlet-breasted, blue-winged birds above you.
Think of me in the garden, humming
quietly to myself in my blue dress,
a blue darker than the sky above us, a blue dark enough for storms,
though cloudless.

At what point is something gone completely?
The last of the sunlight is disappearing
even as it swells—

Just for this evening, won’t you put me before you
until I’m far enough away you can
believe in me?

Then try, try to come closer—
my wonderful and less than.

On Wanting to Tell [ ] about a Girl Eating Fish Eyes

You died just hours ago.
Not suddenly, no. You’d been dying so long
nothing looked like itself: from your window,
fishermen swirled sequins;
fishnets entangled the moon.

Now the dark rain
looks like dark rain. Only the wine
shimmers with candlelight. I refill the glasses
and we raise a toast to you
as so and so’s daughter—elfin, jittery as a sparrow—
slides into another lap
to eat another pair of slippery eyes
with her soft fingers, fingers rosier each time,
for being chewed a little.

If only I could go to you, revive you.
You must be a little alive still.
I’d like to put this girl in your lap.
She’s almost feverishly warm and she weighs
hardly anything. I want to show you how
she relishes each eye, to show you
her greed for them.

She is placing one on her tongue,
bright as a polished coin—

“Nobody wanted your dance,
Nobody wanted your strange glitter – your floundering
Drowning life and your effort to save yourself,
Treading water, dancing the dark turmoil” ~ Ted Hughes, from “God Help the Wolf after Whom the Dogs Do Not Bark”

I know that I said I would continue the NRA post today, but I just can’t. I need a break. I worked on that frigging post for over eight hours, and my body hasn’t recovered. When I get into intense writing mode, I don’t pay attention to my posture, and I tend to sit with all of my muscles tensed. Of course, the result is that I pay for it afterwards. Today my shoulders are a bundle of knots, as is my lower back, which negates any relief I may have gotten from the trigger point injections.

I’m still awaiting a prior authorization on my Robaxin (muscle relaxer), which is what I take during the day, every day. I really need that. Well, that, or a masseuse. Don’t have either at the moment.

Corey and I both got a lot done yesterday: I wrote a thoroughly researched article, and he finished the fence on the back pasture for the goats. Hoorah, hoorah.

Anyway, back to Ted Hughes, who some of you may know as the husband of the poet Sylvia Plath; their marriage and her suicide negatively colored his reputation as a writer until his death, but he was incredibly talented in his own right. Unfortunately for Hughes, the woman for whom he left Plath, Assia Wevill, killed herself and their 4-year-old daughter Shura after Plath’s death. Hughes spent the remainder of his life writing and farming with his second wife, Carol Orchard.

If you want to know more about Hughes and Plath, the 2008 book The Letters of Ted Hughes is a great read, as is his 1998 book Birthday Letters. I own the latter but not the former; it’s on my wish list. I enjoy reading the correspondence of writers as the majority of them lay themselves bare in notes and letters. It always strikes me as being much more immediate than a biography.

You can find a good biography here on the Poetry Foundation site. The Paris Review interviewed  Hughes for its “Art of Poetry Series” (No. 71) in 1995. You can find the article here. In the following quote Hughes discusses how location affected his writing, something I am always pondering myself:

Ever since I began to write with a purpose I’ve been looking for the ideal place. I think most writers go through it.

. . . When I came back to England, I think the best place I found in that first year or two was a tiny cubicle at the top of the stairs that was no bigger than a table really. But it was a wonderful place to write. I mean, I can see now, by what I wrote there, that it was a good place.

I chose “A Woman Unconscious,” the poem below, because once again, its content seems so timely, especially in light of the recent nuclear missile explosion in Russia

Russia and America circle each other;
Threats nudge an act that were without doubt
A melting of the mould in the mother,
Stones melting about the root.The quick of the earth burned out:
The toil of all our ages a loss
With leaf and insect.  Yet flitting thought
(Not to be thought ridiculous)Shies from the world-cancelling black
Of its playing shadow: it has learned
That there’s no trusting (trusting to luck)
Dates when the world’s due to be burned;

That the future’s no calamitous change
But a malingering of now,
Histories, towns, faces that no
Malice or accident much derange.

And though bomb be matched against bomb,
Though all mankind wince out and nothing endure —
Earth gone in an instant flare —
Did a lesser death come

Onto the white hospital bed
Where one, numb beyond her last of sense,
Closed her eyes on the world’s evidence
And into pillows sunk her head. 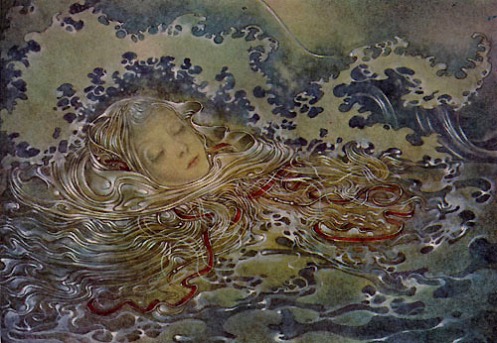 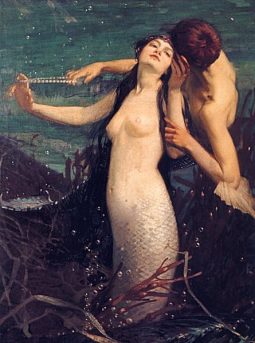 “Pearls for Kisses” (nd, oil on canvas)
by Fred Appleyard 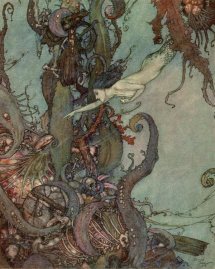 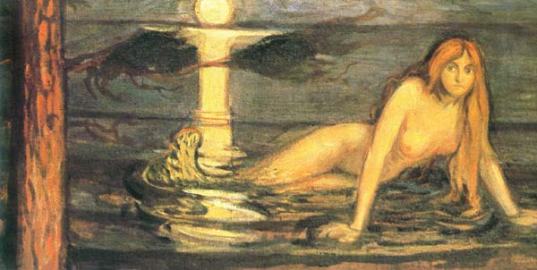 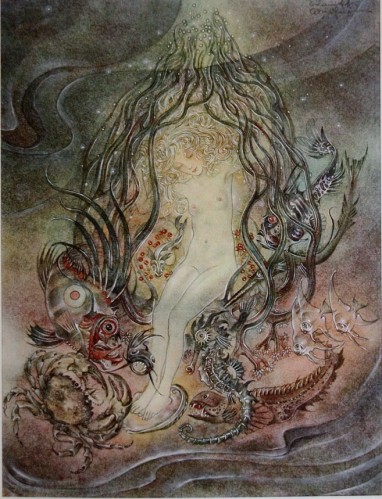 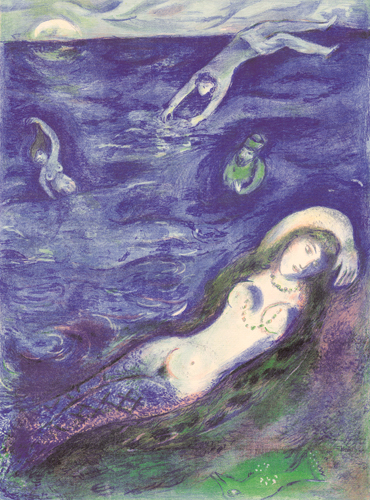 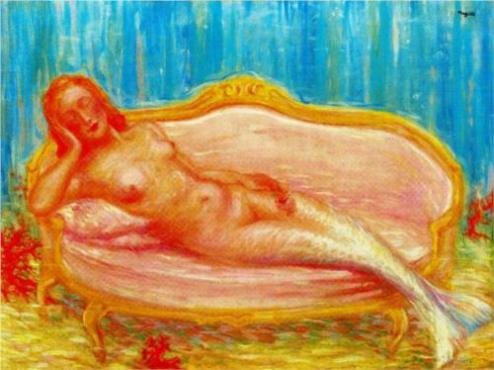 “The Forbidden World” (1949, oil on canvas)
by Rene Magritte 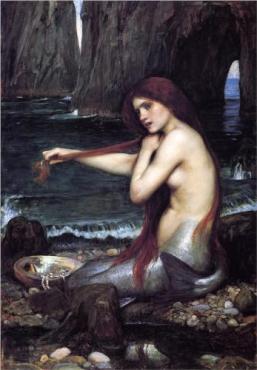 “A Mermaid” (1900, oil on canvas)
by John William Waterhouse 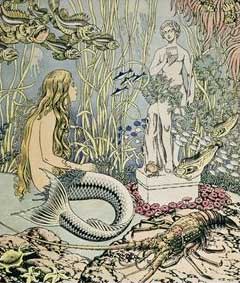 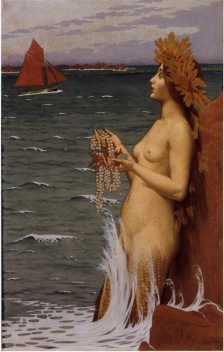 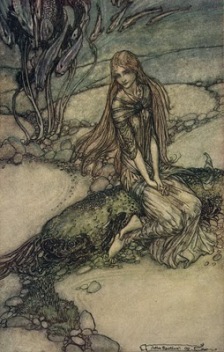 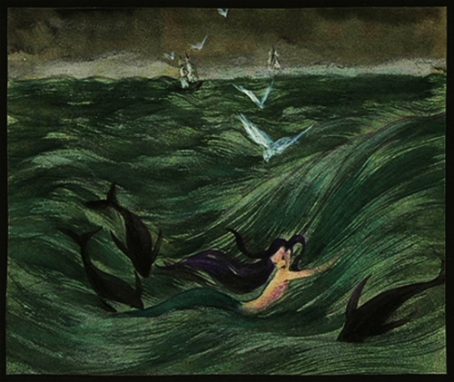 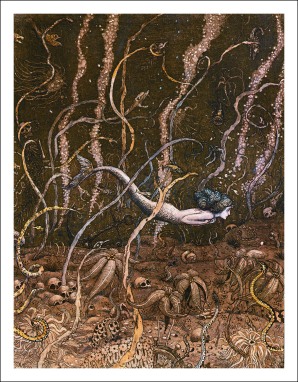 “We spoke of those magic summer nights, looking out over the gulf of Castellammare, when the stars are mirrored in the sleeping sea, and how, lying on your back among the mastic trees, your spirit is lost in the whirling heavens, while the body braces itself, fearing the approach of demons.” ~ Giuseppe di Lampedusa, from “The Professor and the Siren”

A bit of serendipity today: read an essay in The Paris Review by Marina Warner called “The Professor and the Mermaid,” and then came upon a poem by Pablo Neruda that I had never seen before. Love when things like this happen.

Fable of the Mermaid and the Drunks

All those men were there inside,
when she came in totally naked.
They had been drinking: they began to spit.
Newly come from the river, she knew nothing.
She was a mermaid who had lost her way.
The insults flowed down her gleaming flesh.
Obscenities drowned her golden breasts.
Not knowing tears, she did not weep tears.
Not knowing clothes, she did not have clothes.
They blackened her with burnt corks and cigarette stubs,
and rolled around laughing on the tavern floor.
She did not speak because she had no speech.
Her eyes were the colour of distant love,
her twin arms were made of white topaz.
Her lips moved, silent, in a coral light,
and suddenly she went out by that door.
Entering the river she was cleaned,
shining like a white stone in the rain,
and without looking back she swam again
swam towards emptiness, swam towards death.

for Aya at fifteen

Damp-haired from the bath, you drape yourself
upside down across the sofa, reading,
one hand idly sunk into a bowl
of crackers, goldfish with smiles stamped on.
I think they are growing gills, swimming
up the sweet air to reach you. Small girl,
my slim miracle, they multiply.
In the black hours when I lie sleepless,
near drowning, dread-heavy, your face
is the bright lure I look for, love’s hook
piercing me, hauling me cleanly up.